Lan Wangji (蓝忘机, lán Wàngjī) is one of the two main protagonists of the novel, Mo Dao Zu Shi. He is the second young master of the Gusu Lan Sect, and together with his older brother Lan Xichen, they are called the ”Twin Jades of Lan”.

In the past, Lan developed a friendship with Wei Wuxian. When Wei Wuxian became the Yiling Patriarch, he often tried to discourage him from following the dark arts and attempted to protect him from being murdered by the other cultivation sects, but to no avail. After thirteen years of mourning, he recognized Wei Wuxian in the body of Mo Xuanyu and helped to clear Wei Wuxian's name. The two live alongside each other as cultivation partners. 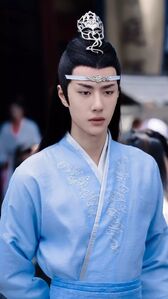 Lan Wangji as he appears in the web series, The Untamed.
Community content is available under CC-BY-SA unless otherwise noted.
Advertisement