Heroes Wiki
Register
Don't have an account?
Sign In
Advertisement
in: Female, Video Game Heroes, The Legend of Zelda Heroes,
and 56 more

Lana (The Legend of Zelda)

Guardian of Time (with Cia)

Lana is one of the main protagonists of Hyrule Warriors. She is a white sorceress who is in love with Link and is at the service of good.

She is voiced by Minako Kotobuki, who also voiced her dark half Cia. 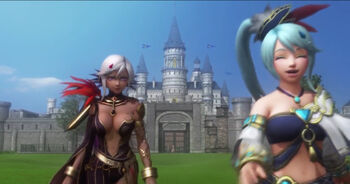 During the Wind Waker continuation of the story, she is looking for the traces of Cia with a dark orb. However, Phantom Ganon stole the Triforce of power from her. She went to Gerudo desert to close the Gates of Souls. Later, she met Tetra, King Daphnes, and met Link again. She knows Cia's presence and the group searched for Cia. The group finally found Cia in the Temple of Souls. However, Cia's power was draining by a doppelgänger which was Phantom Ganon. At the Wind and Earth Temples, they found and defeated Phantom Ganon. After that, Lana, Cia, and Link returned to Hyrule. They used the power of the Triforce to bring the land back to normal. After the land was back to it's original state, Lana happily waved a final goodbye to Zelda, Link, and Impa. However, Cia was a bit sad while saying goodbye to them. Then, Lana walked happily together with Cia back to the Valley of Seers and both continue their roles as guardians of time and protect the balance of the Triforce in peace and harmony. Finally, both sorceresses in the end moved on from their feelings for Link and watched over the balance of the Triforce.

She is a cheerful, optimistic and cheesy girl, having one of the strongest personalities given to any character related to the world of Zelda. She is very energetic and is willing to give everything in battle. Lana and Cia share a tacit rivalry, something that can be seen throughout history. Her determination to stop Cia is such that she is willing to risk her own life or happiness. She cares about Cia's well being and compared to Cia, she has unrequited feelings for Link but in contrast, she knows that Zelda and Link are fated to be with each other. She and Cia understood that they can't always get the person they have feelings for and both lived with it. She is fiercely loyal to the Hyrulean Forces and refuses act on her own feelings for Link due to his relationship with Zelda.

Her optimistic and athletic energy allows her to quickly enter her enemies and attack with her spellbook. Her book gives her knowledge about powerful spells she uses against her enemies. Through them she is able to form magical barriers with very varied results. It is an lightning element weapon and she is able to invoke mystical walls that she can cast, use them to form huge blocks that she uses as a wheel to pass over her enemies, or simply create barriers to sweep her enemies to exploit them. It also has a diverse assortment of other magical spells, including explosions of energy or electrifying shock waves.

In addition to the sorcery book, she can use the Deku Spear which is a water element weapon. With the spear, she can invoke the Deku Tree and the Deku Tree Sprout to attack the enemies. She can also use it to make water and ice appear to kill enemies and she can even use it as a slingshot to shoot her enemies. She can also use the Deku Blade to create tornadoes that will blow enemies to the ground.

It has the fire element and it appears to have portals, blue doors with form of gears of which they leave Cuccos that attacks the enemies, summoning monsters, and Lana can use it to teleport.

Like her other half Cia, Lana can use the power to clone herself in order to confuse Ganondorf.

Like Cia, Lana appears to be hylian girl, but the difference is that she has a lighter complexion, pink lips, long sky blue hair tied into a ponytail on the right side of her hair with fringes on the left with two gems, a sapphire along with a pearl, and she has a navy blue hair clip with white and orange feathers which holds the ponytail, violet eyes like Cia, golden bracelets that have white sleeves with golden stripes that in turn, white bracelets with gold stripes and embedded sapphires and their edges are gold, while on the right side of her neck she wears a white cape with blue and gold edges, she has a silver shoulder pad with golden edges, she also has a necklace that has a sapphire inlaid with iron and gold rings that hang from her necklace with a gold ring with an embedded sapphire with a blue support, with blue braces and blue edges which leaves her shoulders and abdomen exposed, rings on her left hand's fingers, a short skirt which is colored white, blue, and violet with golden stripes, long white stockings, and blue boots with golden stripes with white feathers.

When wearing her Guardian of Time costume, she has lavender hair with a two pointed hat with a blue gem in the middle of the hat. She wears a short white dress with sleeves and feathers, a purple pendant around her neck, a bracelet on her left wrist, lavender stockings with white and lavender shoes.