Start a Wiki
Lance is a bear-like fairy mascot, one of the four main mascots in the anime, Doki Doki Pretty Cure!. He is the youngest out of the four mascots, and is a little spoilt. His partner is Cure Rosetta. He ends his sentences with "~de lance!".

He is voiced by Oohashi Ayaka in Japanese Version and Bryce Papenbrook in the English version.

Lance has yellow and orange fur, and two round bear-like ears, which have orange clover markings on them. His eyes are also orange, with eyelash-like markings. His tail is round. He wears a frilled collar on his neck. He also wears four large flower decorations on his head, and a round centerpiece with a silver heart medallion.

Lance is the youngest out of the four mascots, and is a little spoilt.

Lance has the rare ability to fly, turn into a Commune and help a Alice transform into Cure Rosetta. 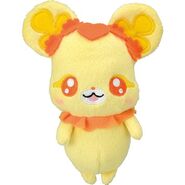 Add a photo to this gallery
Retrieved from "https://hero.fandom.com/wiki/Lance_(Doki_Doki!_Pretty_Cure)?oldid=1561254"
Community content is available under CC-BY-SA unless otherwise noted.