He is voiced by Susumu Chiba, Tokuyoshi Kawashima, Yoshimasa Hosoya, Toshiyuki Morikawa and Susumu Chiba in the Japanese version, and by Wayne Grayson, Robert Buchholz, Benjamin Diskin and Bill Millsap in the English version.

Lance is a tall, thin man with bright scarlet red spiked hair, pale skin, and dark eyes. He dons a red cape, and clothing that has shades of blue. 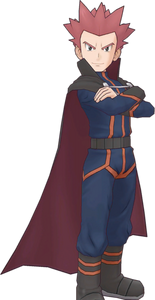