Going on adventures with Walter Beckett

To save the world from Killian (Succeeded).

Sophisticated Secret Agent
Lance Sterling is the main protagonist in the film Spies in Disguise. He is the world's greatest secret agent, who ends up on the run after being framed as the mastermind behind the drone attacks.

He was voiced by Will Smith, who also played Mike Lowrey in the Bad Boys films, Oscar in Shark Tale, Genie in the 2019 live-action remake of Aladdin, a fictionalized version of himself in The Fresh Prince of Bel-Air, Robert Neville in I Am Legend, Steven Hiller in Independence Day, Jim West in Wild Wild West, and Agent J in the Men in Black franchise.

Lance has two forms: As a human, he is a fairly tall African-American man with a semi-built physique and bold, thick eyebrows, and his outfit is a black agent tuxedo. His pigeon form has a head covered in blue feathers, and a body with grey feathers; he retains the shape of his eyebrows in this form. Lance, in the movie, is revealed to have a tattoo of the H.T.U.V.'s logo on the left side of his chest.

Lance is a smooth, suave and debonair man, the opposite of his friend Walter. He handles the espionage with class and grace but he is not much of a people person, often choosing to work alone and rejecting assistance from anyone. In fact, Lance starts out selfish and has a massive ego and fires Walter for incorporating one of his cutesy gadgets into a mission despite it proving to actually be effective in the battle. He also blames Walter for turning him into a pigeon (despite him being the one who took the potion before Walter had a chance to explain what it does), and spends the first half of the movie hating Walter's guts because of it. Because of his status as a pigeon and being framed for a federal crime, he does grow into a humble person, and spending time with Walter caused him to warm up to him and realize that his inventions are useful after all. It's also revealed that a lot of his mannerisms and refusal to be part of a team stem not from his sense of arrogance, but rather the feeling of remorse after seeing innocent people die in the line of duty because of his actions and he doesn't want others to be endangered by becoming acquaintances with him. Sterling's time with Walter allowed him to overcome this, and he now sees Walter as an invaluable ally and best friend.

Lance Sterling infiltrates a pagoda in Japan to recover an attack drone from arms dealer Katsu Kimura. He breaks in and engages in a fight with Kimura's buyer Killian, whose cybernetic arm briefly incapacitated Lance before he gets scanned by him; the two were later surrounded by Kimura's men, allowing Killian to escape with the briefcase containing the drone and leaving Lance cornered. He then used one of his gadgets to try and inflict harm on them; to Lance's surprise, the gadget instead sent exploding kitty glitter and it had the Yakuza gang incapacitated in happiness for a while, the agent included. This gave Lance the chance to catch up with Killian escaping in a helicopter and managing to get the briefcase back.

The agent soon returns to the H.T.U.V. headquarters and confront Walter Beckett (one of the organization's lesser-known scientists), for equipping nonlethal weapons into his suit. Walter tries to convince Sterling that there is a more peaceful way to save the world, but Sterling fires him before he can explain his latest invention: "biodynamic concealment".

Finding the briefcase to be empty, he goes rogue on a journey to pursue Kimura. Security forces agent Marcy Keppel reveals footage of Sterling (actually Killian in a holographic disguise) leaving with the drone, framing him as a traitor. Sterling escapes the H.T.U.V. and decides to track down Walter to help him disappear. Meanwhile, Killian breaks into the H.T.U.V. weapons facility.

While searching Walter's home for his invention, Sterling unknowingly ingests the concoction and transforms into a pigeon. Before Walter can start making an antidote to change him back, Marcy and other H.T.U.V. agents chase them through the city, but they escape in Sterling's spy car. The two track down Kimura to a resort in Playa del Carmen, Mexico. There, they learn of Killian's whereabouts in Venice, Italy before Marcy and the H.T.U.V. can capture them again. On their way to Venice, Walter attempts to make the antidote but fails.

Arriving in Venice, Walter is confronted by the H.T.U.V., who are unaware of Sterling's condition. Revealing that she knows about Wendy, Walter's mother who was a police officer who died on duty and saved lives, as Lance finally sees how completely selfish he was to Walter, knowing why he took the agency in the first place. Marcy tries to convince him to help turn Sterling in, but Walter refuses. Suddenly, a drone distracts the H.T.U.V. and allows Walter and Sterling to escape. The two discover the drone carrying the H.T.U.V. agent database, and Walter manages to retrieve it. However, Killian shows up, takes the database, and prepares to kill Walter. With help from hundreds of pigeons in the surrounding area, they distract Killian and flee. Disguised as Sterling, Killian escapes the H.T.U.V., shaking Marcy's suspicions of Sterling upon her seeing him with a robot hand.

Whilst underwater in a submarine, Walter reveals he planted a tracking device on Killian and locates him at the weapons facility. Walter manages to perfect the antidote and successfully turns Sterling human again. Reaching Killian's hideout, Sterling is concerned about Walter's safety and sends him away in the submarine. Once inside, Sterling confronts Killian but is knocked down and captured as Killian reveals he has mass-produced hundreds of drones to target everyone at the agency using the database as revenge for killing his crew in a past mission led by Sterling. Noticing Walter returning in the submarine, Killian destroys it; unbeknownst to them, Walter survives with the help of one of his inventions, the inflatable hug.

Once Walter frees Sterling, the two escape and contact Marcy for support as the drones approach H.T.U.V. headquarters in Washington D.C. Walter attempts to hack into Killian's bionic arm. When Killian realizes this, he tries to flee via air with a drone, but Walter catches up. Walter risks his life by trapping Killian in one of his protective gadgets and deactivates the villain's arm as Walter himself falls, but Sterling, who has turned himself back into a pigeon, successfully flies for the first time and carries him to safety with help from other pigeons, while Killian is found and arrested.

Despite saving the world, Sterling and Walter are fired for disobedience. However, they are quickly rehired by the H.T.U.V. as the agency could learn from Walter's more peaceful ways of handling villainy. 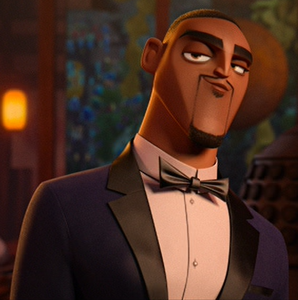 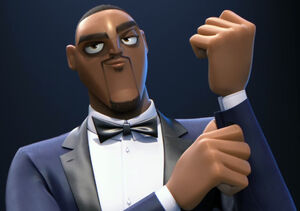