Thief (formerly)
Chef at the The Snuggly Duckling

Stealing (formerly)
Helping his friends
Looking after Kiera and Catalina

To help his Best Friend and Rapunzel

Arnwaldo Schnitz was orphaned at a young age. In his youth, his only friend was another small boy in the orphanage named Eugene Fitzherbert. The two were as close as brothers, and considered themselves family. Once they grew older and left the orphanage, Arnwaldo and Eugene turned to

a life of crime under the aliases Lance Strongbow and Flynn Rider, respectively. The duo were also accompanied by an even more crooked thief called the Baron, who betrayed them during a robbery involving two nobles and Queen Arianna of Corona. At some point, however, Lance and Eugene were separated, the former having been arrested and sent to prison. The two would not see or hear from one another for eight years.

Lance is suave, charming and quick on his feet. Like Flynn, he grew up with a life of thievery, and such an upbringing has left him misguided and untrustworthy. When first introduced, he is almost immediately presented as a pathological liar that manipulates those around him to get what he wants. Lying and stealing are about as far as Lance was willing to go as a thief, however. He is quite harmless beyond that, even going as far as to apologize for knocking a man (presumably a guest) out after he and Eugene broke into the Baron's home. And though his lies and thievery caused a great deal of trouble, he was willing to apologize and admit his mistakes, despite initially justifying his wrongful actions as simple, "what we [he and Eugene] grew up on". To his core, Lance is a warm-hearted person and cares for his friends. By the end of "The Return of Strongbow", he remorsefully took the blame for the conflict caused in the episode, mostly for the sake of Eugene, and his relationship with Rapunzel. He also made good with the treasure he stole by donating it to charity. By the time of "Pascal's Story", it is shown that Lance's kindness and loyalty has earned him the privilege of being a welcomed guest at the castle.

Lance first appeared in "The Return of Strongbow", where he visits Corona in hopes of recruiting Eugene in a heist to get revenge on the Baron. When Eugene proves to be reluctant, Lance claims that the treasure's owner bestowed the wealth upon him. Eugene eventually agrees, only to scold Lance for lying to him after learning the truth. The duo nevertheless make off with the treasure, one of the items being a ring that previously belonged to Queen Arianna. Eugene stole the ring in the past, and fears that Arianna will discover it, remember the robbery, and banish him. Unfortunately, the ring fell into Rapunzel's possessions, forcing Lance and Eugene to try and steal it back, though they're caught. Lance comes clean and apologizes of both Eugene and Rapunzel, and earns their forgiveness. Afterward, Lance, under his real name, selflessly donates the Baron's treasure to Corona's orphanage (though he did manage to keep a small bit for himself).

In "Pascal's Story", Pascal waits to have a dinner date with Rapunzel in the dining hall. However, she never arrives, and the chameleon is instead greeted by Lance, who traps Pascal and eats the prepared food, much to Pascal's dismay. Noticing this, Lance tells Pascal that he should direct his anger toward whomever stood the latter up before proceeding to sleep into a food coma. This, along with other factors, would drive Pascal to run away in heartache. In the end, Pascal returns to the castle and punishes Lance by making him wash the dishes from the food he ate, much to Lance's dismay.

In "Big Brothers of Corona", Eugene tries to get Lance a job as a guard instructor in the palace, but the Captain of the Guards is reluctant to hand over the position. After apprehending two young thieves that had been terrorizing the kingdom, King Frederic tasks Lance and Eugene with reforming them. Though reluctant at first, the Captain suggests that, should the two succeed, he'd be willing to give Lance the guard instructor position. By the end, Angry and Red refuse to quit thieving, but they form a loving relationship with Lance and Eugene and return the stolen riches before leaving Corona. Lance, meanwhile, is offered the job but turns it down, and instead chooses to work as the Snuggly Duckling's new chef, replacing Attila.

In "Queen for a Day", Lance repays the king for his kindness by joining Eugene and the Pub Thugs on their mission to save the king and queen after the two became stranded in the mountains, further strengthening the bond between Lance and the royal family.

In "Secret of the Sun Drop", Lance becomes involved in Rapunzel's plan to break herself out of the castle. His part involved showing up at Rapunzel's door with a series of gifts, in which Pete and Stan the guards refuse him entry, the former insinuating Lance's obvious attempt to break Rapunzel out. Lance distracts the pair by inviting them to inspect the gifts, one of them being an accordion, which he encouraged Pete to play, creating enough noise so Eugene and Hook Foot could tear off the window bars from the outside without being discovered. He later joins Eugene, Cassandra and other Corona denizens in the final battle against Varian and his army, playing a role in the rescuing of Queen Arianna. In during which, Lance and Eugene used one of their old thieving techniques to defeat one of Varian's Automatons.

In "Beyond the Corona Walls", it is shown that Lance has joined Rapunzel on a mission to leave Corona and follow the path created by the mysterious black rocks that have plagued the world—along with Eugene, Cassandra and Hook Foot. Like Eugene and Rapunzel, Lance views the journey as a fun road trip, though he is less pleased to find that a gluttonous Shorty stowed away and ate all the food while doing so. Unfortunately for Lance and Eugene, their globetrotting adventure also means running into familiar faces, such as the vengeful Baron, his daughter, and his goons. The Baron poisoned Lance with a spider bite to get Eugene to marry Stalyan but fortunately, he was saved by Pascal, who managed to grab the antidote.

After defeating the Baron, Lance helped the others convinced Captain Quaid to come out of retirement to be Vardaros' sheriff again, with Vex as his deputy and search for a gopher for the Gopher Grab, although he mistaken a Sneezeweasel for one, before they continue their journey. When the team reaches "the forest of no return", they meet Adira again and Lance develops a crush on her.

After a series of adventures, they reached the Great Tree. Lance attempts to impress Adira by lying to her but Eugene called him off for being dishonest. Lance and Eugene were then drugged by and nearly eaten by a man-eating flower as they were sing the "Buddy Song". Later on, he was surprised to see Rapunzel used the Moonstone incantation and managed to get the wounded Eugene out to safety by the princess's order. Once everyone made it out of the falling tree alive, they continued their journey.

In "Destinies Collide", Lance and his friends had finally arrived to the Dark Kingdom. As they get across a deep trench, he asked Cassandra if she believes in destiny, to which she replied that she does. When they were attacked by King Edmund, Adira arrived, to Lance's delight, and help fight him off. He was shocked to see Eugene and Adira fell down the trench with Edmund but was relieved to learn that they're both alive. He also expresses joy when he heard Edmund called Eugene son, exclaiming that "[he's] finally adopted". When the ghosts of the Dark Kings attacked the group, it was Lance who figured out how to get rid of them: by destroying their statues. He was also delighted to be thanked by Adira for saving her. He helped lift a statue that was blocking the entrance to the room with the Moonstone in it, allowing Rapunzel, Eugene, Pascal, and Cassandra to enter. 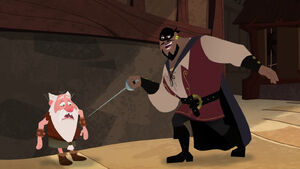