Lancer is a minor protagonist from Fate/Zero who is the servant of Lord Kayneth Archibald El-Melloi during the fourth Holy Grail War. He is a chivalrous servant who wishes to do his best to serve his master and obtain victory within the war for the grail. He shares a bond of mutual respect with rival Servant Saber, his greatest wish being to face her in fair combat.

Lancer's true identity is Diarmuid Ua Duibhne, the son of Donn, foster son of Aengus, and first warrior of the knights of Fianna. He is known as Diarmuid of the Love Spot, due to a magical love spot granted to him by a young girl. Any woman who gazes upon the spot instantly fell in love with him, which eventually lead to an encounter with Gráinne, the bride of Fionn mac Cumhaill. Gráinne, having fallen in love with Diarmuid at her wedding party, placed a geis upon him to run away with her. They were pursued relentlessly by Fionn, but after much blood was shed, he decided to recognize their marriage, granted Diarmuid a proper title and land, and welcomed them back as subjects.

Sometime later while hunting with Fionn, Diarmuid was fatally injured by a wild boar's fangs. Fionn, who had the ability to transform spring water in to a powerful healing agent was with him, so he had no fear of death. Fionn only needed to walk a few steps to the nearby spring, but with jealousy and hatred towards Diarmuid on his mind, he spilled the water twice. By the third time he went to scoop water, Diarmuid had already succumbed to his wound.

Lancer is regarded as a remarkably handsome and beautiful man with quirky long hair combed backward in a rough fashion. He wears a dark teal outfit that is thought of by Saber and Irisviel von Einzbern as odd. Irisviel instantly notes that his features are capable of sweeping a woman's heart at a glance. It is described that the bold features of his face are the high bridge of his nose and his valiant eyebrow. His hard cut mouth marks him with a stoic air, but his eyes seem to hide a quiet grief. He has a beauty spot like a grain of tear below his right eye that only serves to make his gaze even more brilliant. She also senses that he has a strong, manly scent that rises from him. She soon realizes his elegant air of beauty is somewhat unnatural. Even though his features are considered handsome, much of it comes his spiritual power charming women due to the curse of his beauty spot.

Lancer is an extremely proud and noble knight who wishes to serve his lord to the best of his abilities. The geis laid upon him by Gráinne was taken by Lancer as a test of his pride. He never once blamed her for forcing it upon him, and he truly admired her ability to throw away her pride, title, and future for the sake of her love. He was constantly distressed by the fact that he betrayed his lord, and even as he died while Fionn did nothing, he did not blame his lord for his actions. Lancer believed that despite the cruel twist of fate that led him down this path, the days spent with his lord and his love were used to the fullest.

Lancer sees the Grail War as a miracle that will allow him to regain his pride as a knight by delivering the Grail to his master. He sees no use in wishing upon the Grail, as simply being summoned has already half-fulfilled his greatest desire. To Lancer's disappointment, El-Melloi doesn't believe him in the slightest. He constantly berates Lancer, believing that Lancer plans to betray him and take his fiancee, Sola-Ui Nuada-Re Sophia-Ri, by using his magical spot. Despite his master's distrust, Lancer remains extremely loyal, though he fears that Sola's attraction to him will eventually cause him to betray his master once more.

Lancer steadfastly believes in honor during battle. While being pursued by the knights of Fionn, he refused to fight against his former comrades. During his battles with Saber, he attempts to provide for the fairest conditions possible. He even goes as far as to fight alongside her, acting as her "left hand", after she suffers the crippling wound from Gáe Buidhe in order to be able to face her in battle again in the future.

Lancer is summoned by Kayneth Archibald El-Melloi in the fourth Holy Grail War in the stead of Rider-class Servant, Iskander, as the catalyst to summon him was stolen by Waver Velvet. The contract formed with Lancer is unique in that while Kayneth holds the Command Spells, the energy to materialize Lancer is maintained by Sola-Ui, Kayneth's fiancée. Lancer, on the orders of Kayneth, actively makes his location known in order to entice a battle, while Kayneth hides his location. Saber and Irisviel von Einzbern answer this challenge, and eventually Lancer attains the upper hand by successfully striking her with Gáe Buidhe.

Before their fight can continue, Rider, Berserker, and Archer interrupt the battle, and once Berseker begins to attack Saber, Kayneth orders Lancer to join him and finish her off. As it is against Lancer's code of honor, Kayneth uses a command spell to force him to attack. Rider, who holds similar values of honor to Lancer, decides to force Berserker to retreat, and threatens to face Lancer with Saber if Kayneth doesn't back down. Lancer is later berated for his actions, though Sola cuts it short by criticizing Kayneth for not actively participating. Lancer stands up for his master, who is irritated by Lancer because he believes that Sola has become infatuated with him. Before the issue can be addressed, their base, Fuyuki Hyatt Hotel, is attacked by Kiritsugu Emiya and Maiya Hisau, who destroy the hotel's foundation and collapse it around the three.

When Kayneth and the other Masters are offered a reward of extra Command Spells for defeating Caster, Lancer is sent to kill off the magic-wielding Servant, who at the time is engaged in battle with Saber. With Saber's help, he is successful in dispelling Caster's monster army with Gáe Dearg, but abandons his duel with her in order to rescue Kayneth from Emiya Kiritsugu. Rendered bedridden and unable to perform magic, the injured Kayneth is forced to hand over his remaining Command Spells to Sola-Ui, whose infatuation with Lancer has escalated to near-obsession. Lancer is uncomfortably disturbed by how his current situation resembles his past life.

Lancer plays a key role in defeating Caster, when the Servant summons a giant monster to wreak havoc on Fuyuki City. He willingly destroys Gáe Buidhe in order to remove the enchantment inhibiting Saber's abilities, allowing her to employ her full power and destroy Caster.

Saber and Irisviel later confront Lancer to finish his duel with Saber, but both are unaware that Saber's Master, Kiritsugu, had already formulated a plan to eliminate both Lancer and his Master. They have an equal battle for a time, though Lancer is unsettled by the fact that Saber is simulating the injury from Gae Buidhe. He believes it is out of pity, but she corrects him in that fighting with honor is the only way to draw out her true strength.

The battle ends when Kiritsugu, holding Sola-Ui hostage, coerces Kayneth into using his last Command Spell; Lancer is thus forced to drive Gáe Dearg into his own chest. The shocked Servant realises that he has been fatally betrayed by his current Master, just as his former master Fionn caused his death during his first lifetime. Enraged, Lancer dies cursing the Holy Grail, Saber, Kiritsugu, and the world at large for his fate.

Lancer is an extremely accomplished spearman, capable of skillfully using two spears of different lengths with blinding speed and agility. He is also just as skilled while wielding a single spear. He is extremely calm and perceptive during battle, and with his Eye of the Mind (True) skill, he will always have a much greater possibility of winning or properly escaping from battle. He is extremely insightful, as he is capable of leading Saber, whose Instinct skill allows her to avoid danger, into a well thought out trap. By utilizing her lack of knowledge of Gáe Buidhe, he made Saber believe that he had simply abandoned it, and later managed to lure her into a position where he could freely kick it towards her. He obtains no geographical boosts from the cultural sphere around Japan, and due to his greater prana supply from his Master, he has a greater advantage against Cú Chulainn in terms of pure firepower. Cú Chulainn would gain an edge over him should they fight in Ireland.

Lancer has exceptional speed, though the rest of his statistics are much lower. His Magic Resistance renders only high level magic a threat to him. He can easily defeat Servants who rely heavily on their Noble Phantasms. He has a good chance of genuinely winning the Grail if a sound tactic is used, but his failure mainly resides in the poor Master-Servant dynamic between him and Kayneth. It is noted that Assassin could potentially defeat him quickly, but no explanation is given as to the reason. He possesses a curse of the Mystic Face variety, not unlike the Mystic Eyes exhibited by Medusa. The curse takes the form of a beauty spot on his face, and causes any woman who looks upon his face to instantly fall in love with him. It can be overcome by individuals with high magical resistance, such as accomplished magi and Servants.

He also qualifies for the Saber class, and he would use the two magical swords Moralltach and Beagalltach as his Noble Phantasms. Kayneth's original expectations may have been to have summoned him as Saber.

While he follows the codes of chivalry during the War, it would be possible to have him to use underhanded tactics to have a better chance at claiming the Grail. Convincing him that Heaven's Feel is filled with filth instead of an honorable battleground with other heroes and avoiding contact with Saber to keep him from awakening his Chivalric Pride would allow him to utilize Gae Buidhe in a hit and run strategy. Briefly engaging opponents in order to land precise hits with the spear and then retreat would become the main form of attack. He would not directly engage them, allowing him to cripple his opponents one by one by repeatedly attacking them. The other tactic would involve manipulating or taking advantage of Team Berserker in order to let Berserker defeat other Servants and fight him in the final battle. 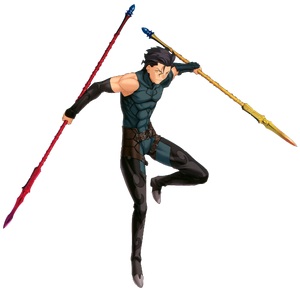 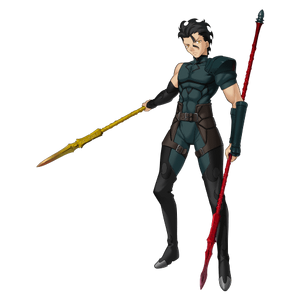 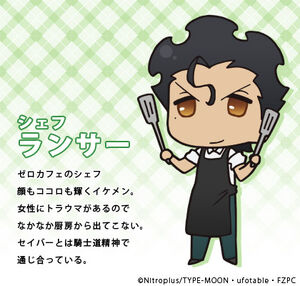 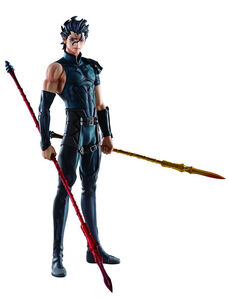 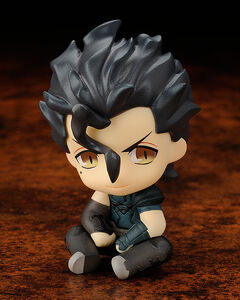