Blue Spearman of the Wind, Lancer

On & Off Hero, Servant of a Villain, Casanova

Lancer is a supporting protagonist in the visual novel and anime series Fate/stay night. He is initially the Servant of Bazett Fraga McRemitz and later becomes the Servant of Kirei Kotomine during the Fifth Holy Grail War. He is a fierce, but balanced warrior who enjoys combating a worthy opponent. He has a playful attitude and takes a very carefree approach to life, but is quick to work himself into a frenzy during a heated battle. Lancers are hailed as the "Most Agile" of Servant classes.

He is voiced by Nobutoshi Canna in the Japanese version of the anime and Tony Oliver in the English version.

Lancer is Cú Chulainn, a hero from the Ulster Cycle of Irish mythology. He is a demigod, the offspring of a mortal woman, Dechtire, and the deity, Lugh. Although born with the name Sétanta, he adopted Cú Chulainn after killing the hound of a smith, Culann, and promising to replace the slain canine while another was reared. Cú is the Irish Gaelic word for "hound." During Cú Chulainn's expedition to the Land of Shadows in Scotland, he trained under a sorceress named Scáthach and acquired his signature weapon, the cursed javelin, Gáe Bolg.

With his heroic exploits, Cú Chulainn acquired a reputation of savagery in battle, though he was a well-meaning and courageous young man. However, above all, he is best known for keeping his word. He once tells Shirou that he also could have been summoned as a Berserker class because of his savagery. His Noble Phantasm is Gáe Bolg, a cursed lance that inflicts wounds that do not heal. When its name is called, it reverses cause and effect to strike the opponent's heart without fail. The proper use is as a throwing weapon and has such piercing power that it has only been stopped, at great cost, by Archer utilizing Rho Aias.

He has a playful attitude and takes a very carefree approach to life. He enjoys fishing, hunting (although not seen doing it) and hitting on cute girls, but is quick to work himself into a frenzy during a heated battle.

In Fate/hollow ataraxia and Carnival Phantasm, when not in battle, he wears his casual clothes which consist of a hawaiian shirt with light green, lime, red and orange flaming patterns, black pants and brown shoes. He also wears these clothes when fishing.

When he is with Shirou, he wears a tight white shirt and black pants, and when he's in contact with Bazett Fraga McRemitz, he wears a white collared long sleeved shirt with a black tie, black vest, black pants and shoes, and a black apron.

Lancer was originally summoned by Bazett Fraga McRemitz, an Irish representative of the Mage's Association. However, Kirei Kotomine betrayed Bazett and severed her left arm to obtain her Command Spell, leaving her almost dead. He then used her stolen Command Seals to gain the allegiance of Lancer and enter into the 5th Holy Grail War. Despite his wishes to avenge his fallen master, Lancer was forced to bend to Kotomine's will. Lancer is disgruntled at having to serve a Master who uses such cowardly tactics, but he is forced to obey Kirei's wishes. Kirei chooses to employ a passive strategy regarding Lancer. He has Lancer go out on reconnaissance, and scout the locations and identies of other Masters and gauge how dangerous their Servants are. During his fight with Archer, Lancer noticed that Shirou Emiya had witnessed his entire battle. Believing Shirou to be an ordinary human, to preserve the secrecy of the Holy Grail War, Lancer silences Shirou by stabbing him through his heart.

Later, Lancer realizes that Shirou has recovered from his mortal wound, so he tracks and corners the young mage within the shed of his home estate. Before Lancer is able to strike a mortal blow, Shirou is rescued by the recently summoned Servant, Saber, who then engages Lancer in combat. Outmatched, Lancer flees the scene just before the arrival of Archer and his master.

After this, for the majority of the story, Lancer is generally inactive.

In Fate, Shirou is lured to Kotomine's church, and once again wounded by Lancer. Saber eventually arrives to rescue Shirou. After events unfold, Kotomine reveals his other Servant, Gilgamesh, the Archer from the previous war. Kotomine orders the both of them to kill Saber and Shirou, and leaves. Lancer, disgusted by Kotomine keeping Gilgamesh's existence a secret from him, and by Gilgamesh himself, decides to rebel against Kirei. Though he claims he is doing it out of hatred for Gilgamesh and Kotomine, and not to help them, Lancer chooses to fight Gilgamesh and thereby aids Shirou and Saber in escaping. He is then defeated by Gilgamesh.

In Unlimited Blade Works, after being driven out of his church by Caster, and faking his death, Kotomine orders Lancer to cooperate with Shirou and Rin. Lancer helps them with their plan to defeat Caster by fighting Archer to distract him, so that Rin and Shirou are able to enter the church. Ostensibly defeating Archer, but choosing not to conclude their battle, he later reappears to offer his aid again to Shirou and Saber after Rin is captured. Upon rescuing Rin, Kirei suddenly appears and orders Lancer to kill Rin. In addition to his previous disgust with Kotomine, Lancer has come to admire Rin, and therefore refuses his order. In response to this, Kotomine uses a Command Seal to force Lancer to give himself a mortal wound. However, before he fades away, Lancer manages to kill Kotomine, and bids goodbye to Rin. Before his death, he sets the Einzbern castle on fire.

In Heaven's Feel, upon sensing a disturbance at the Ryudou Temple, Lancer investigates it as per his orders by Kotomine to scout the competition. He discovers and engages in battle with True Assassin, but during the battle, he is attacked and killed while his heart is consumed by the True Assassin; then his body is absorbed by the black shadow of Avenger and Sakura.

In Fate/hollow ataraxia, Lancer's role is expanded far beyond Fate/stay night. He is normally spotted fishing at the Fuyuki docks, but he is frequently seen wandering the city or at his part-time job as a grocer. He is quite amiable, chatting with many of the former Holy Grail War participants, and is well liked. Nearly every female character in the game is subject to a pick-up attempt. (Or in Shirou's words, "Harassment") These attempts tend to work out well, thanks to not downplaying his Servant qualities. However, in the end things generally turn out differently, leaving Lancer annoyed and/or embarassed and the girl(s) in question safe from the grasp of the Blue Panther. He makes no attempt to combat the Shadow Wolf Beasts during the Fuyuki eclipse, instead quietly presiding over Avenger's ascent into Heaven's Feel from a distance.

Lancer has prevalent role in the Fate segments of Carnival Phantasm and also acts as part of a running gag involving his death. He constantly is "killed" within a segment in each episode aside from the second. While he dies without mention during Tsukihime segments, characters comment on it during the Fate segments with "Lancer died!", followed by "You bastards!" (or its Japanese equivalent, "You aren't human!") in a reference to Kenny McCormick's similar constant deaths in South Park. He has an episode based on the concept called "Final Dead Lancer", parodying the Final Destination film series, where he manages to avoid his deaths from the previous episodes. He ends up being retroactively killed in the events from the second episode, and he revives from his grave at the end of the episode as a horror movie reference.

Lancer's weapon, the Gáe Bolg, a cursed spear which is said to always hit the target. His weapon itself has two main techniques which can be classified as separate Noble Phantasms.

The first technique is to reverse causality in a technique called the The Spear of Impaling Barbed Death which can be explained by saying the cause is that "the heart is pierced" and the effect is that "the spear is thrust". Thus, the lance has already hit the heart before it is thrust, and the actual action is merely a formality that occurs due to the piercing of the enemy's heart.

The second technique utilizes the full potential of Gáe Bolg's curse by converting prana into energy and releasing the accumulated power after the spear is hurled, detonating on impact with enough power to blow away a multitude of enemies.

Lancer also qualifies for the Berserker and Caster classes. He had gone berserk several times in life, and he takes great pride in having the ability and knowledge enough to qualify for the Caster Class due to his knowledge on Runes. He obtains no geographical boosts from the cultural sphere around Japan. If he were to be summoned in western Europe, he would receive a general boost in power similar to other European Heroic Spirits, and he would display a much sharper increase in power in Ireland. If he were to be summoned in Ireland, he would have had potential access to a castle, chariot, protection of sleeplessness, and the like due to being in the land where his legend took place. While Diarmuid Ua Duibhne has an advantage in a fight due to having a better prana supply from his Master, Lancer would obtain more of an advantage should they fight properly in Ireland due to his fame. 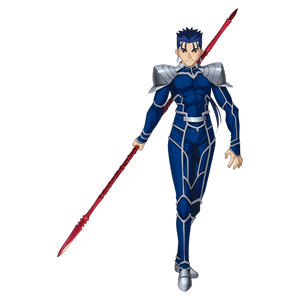 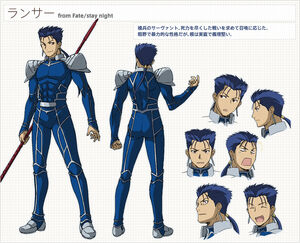 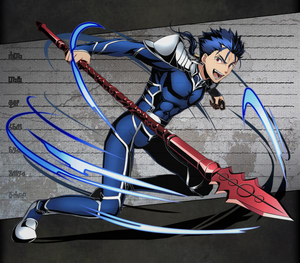 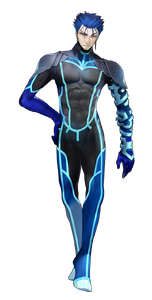 Fate/Extella
Add a photo to this gallery 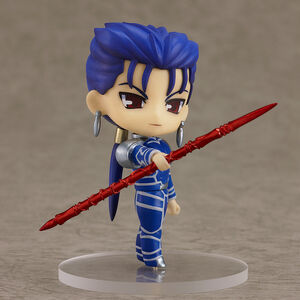 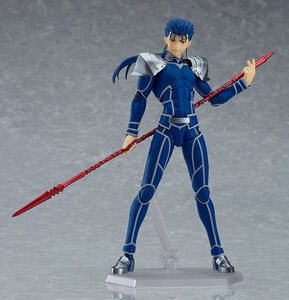 Retrieved from "https://hero.fandom.com/wiki/Lancer_(Fate/stay_night)?oldid=1692518"
Community content is available under CC-BY-SA unless otherwise noted.