He is portrayed by Billy Dee Williams who would later portray Harvey Dent in the classic trilogy and by Donald Glover as young Lando, who also portrayed Aaron Davis and Simba as his younger self. Williams reprised his role in the Star Wars Rebels episode Idiot's Array and will reprise it in Star Wars: The Rise of Skywalker.

The Empire Strikes Back

Lando Calrissian first appears in The Empire Strikes Back as the administrator of Cloud City, concerned primarily with keeping the Empire out of his affairs. Bounty hunter Boba Fett, working for Darth Vader tracks Han Solo, Princess Leia, Chewbacca and C-3PO, traveling in the damaged Millenium Falcon, to Bespin. Shortly before Solo and crew make it to Bespin, Darth Vader and a contingent of Imperial forces arrive at Bespin and threaten to take over the city. Lando is strong armed by Vader into betraying his old friend and turning him over to Boba Fett. Unwilling to leave the city in the hands of the Empire, Lando reluctantly does so, but his conscience gets the better of him when Vader goes back on his word and takes Leia and Chewbacca as prisoners.

When Lando sets Leia, C-3PO and Chewbacca free, Chewbacca chokes him for giving Han to Vader and Fett, and Leia angrily tells Lando that they don't need his help before they chase after Fett, who escapes with Solo. In the ensuing evacuation of Cloud City, he helps Leia, Chewbacca, C-3PO, and R2-D2 escape. He then assists Leia in rescuing the maimed Luke Skywalker, who had fallen into Vader's trap and lost his right hand in a duel, from the underside of Cloud City. Afterwards, he joins the Rebel Alliance and promises Leia that they will find Han.

Return of the Jedi

In Return of the Jedi, Lando goes undercover to help Luke rescue Han from crime lord Jabba the Hutt. During a battle with Jabba's henchmen, Han saves Lando from being devoured by the sarlacc; Lando then helps Han and the others destroy Jabba's sail barge. For his heroics, he is made a general in the Rebel Alliance. Lando then takes the pilot chair in his old ship, the Millennium Falcon, and leads the attack on the second Death Star. He helps the Rebels to victory by destroying the gigantic Imperial battle station.

The Rise of Skywalker 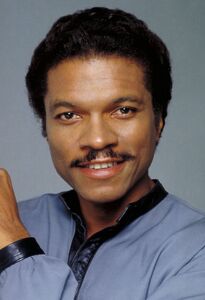 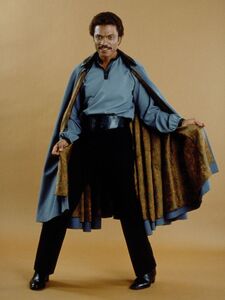 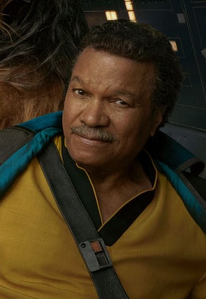 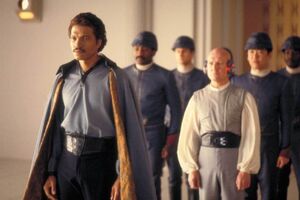 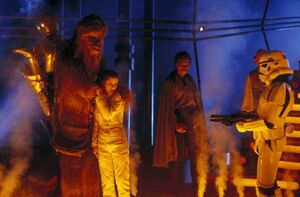 Lando and Chewbacca off to rescue Han 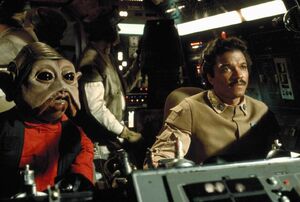 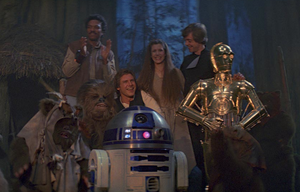 Lando and the Rebels celebrate the Empire's defeat 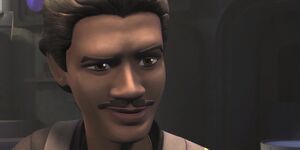 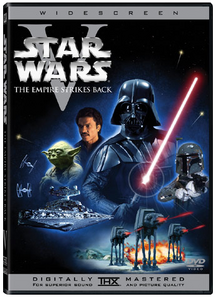 Lando on the Empire Strikes Back DVD 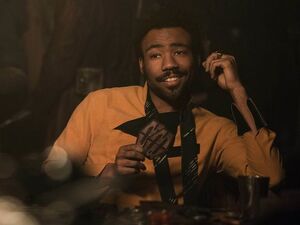 Retrieved from "https://hero.fandom.com/wiki/Lando_Calrissian?oldid=1779231"
Community content is available under CC-BY-SA unless otherwise noted.