Start a Wiki
Larry is Samson's sidekick and the tretagonist from the 2006 CGI-animated Disney film The Wild. He is voiced by Richard Kind.

Larry is a dim-witted yet very good-hearted anaconda who tries to keep up with Samson and the gang, despite his lack of hands or legs. Though he does help, being the stretchiest animal in the zoo, and his elongated body can be used as a variety of things. He is used as a slingshot during the curling championship when Samson is about to fling his turtle curling iron across the ice rink, but slips. Larry is also used as a prop when he and the other animals become trapped inside a garbage disposal truck. Samson uses Larry to hold the trash compressor open, but it fails. Larry then frightens the truck driver, and the animals manage to escape. He accompanies Samson during Ryan's rescue and gives Ryan a choking hug upon finding him. Larry is last seen on the ship wearing a fruit hat and makeup done by Cloak and Camo as a "snake-over", and dances with his zoo friends as they head back home. 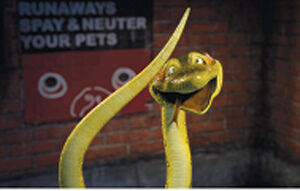 Retrieved from "https://hero.fandom.com/wiki/Larry_the_Anaconda?oldid=1468230"
Community content is available under CC-BY-SA unless otherwise noted.