Lars is a major character in 101 Dalmatians II: Patch's London Adventure. He is an eccentric, spot-fixated artist who speaks with a French accent. He is voiced by Martin Short.

Cruella first meets Lars when she stumbles into an art house show. Lars' main style of art is shown to be black spots on a white surface, similar to that of a Dalmatian's coat. Lars is attracted to how Cruella is able to see his artistic vision, and agrees to do a painting for her in exchange for her being his muse.

On his first painting for her, Cruella comments that it's all wrong, despite his claim for it to be his best work yet. Cruella notes it needs to be better than his best, and after being seduced by Cruella, Lars vows to paint another canvas, one after another, until he has found artistic perfection and will not stop until Cruella is pleased.

Many failed attempts later, he submits in defeat about not being able to please Cruella, but she assures him that all he needs is some inspiration. She later returns with the captured Dalmatian puppies, Lars then bursts out with joy and delight, hugging the puppies, believing that Cruella wants him to paint a portrait of them, when in fact, she wants him to make art with the puppies (use their coats as canvas, etc.).

Shocked and horrified by this, Lars refuses, commenting how he may be eccentric but is not a sicko, and says that she will not harm any of the puppies if he has anything to say about it. Cruella then gags him and ties him up in one of his paintings and calls Lars a disappointment, but figures if she cannot have a portrait, at least she can get a coat.

After Patch mananges to free his captive siblings, and they make their way out of the warehouse through a skylight, Lars is later freed by Thunderbolt and he drives him to an alley to help Patch stop Cruella, Jasper, and Horace. He later goes to summon the police whom he gives a statement to, describing how mean Cruella was to him and the puppies, and then he passed out.

In the credits, a newspaper of Lars is shown revealing him to be labeled as an artistic genius who made lots of money for all of his new spot paintings and the piece of splatter art that Patch made when being chased by Jasper and Horace earlier.

While Lars does appear in the Patch's London Adventure video game, he is shown here as an enemy who will attack Patch in the studio levels. This is despite the fact that, in the film, Lars refuses to let any harm come to the Dalmatian pups and also helps Patch against Cruella. He uses his paintbrush as a weapon in the game. 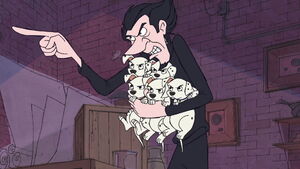