Commander of the Tekken Force (formerly)

Talking on the phone.

Save the world (primary).

Stop Jin Kazama and the Mishima Zaibatsu.
Expose the real colors of G Corporation to the world.
Destroy Azazel (succeeded with the help of Jin).
Kill his father (failed due to Heihachi got killed by Kazuya).

Lars Alexandersson is the main protagonist in Tekken 6 and one of the main protagonists in Tekken 7. He is also a bonus playable character in Naruto Shippūden: Ultimate Ninja Storm 2. Lars is part of a crossover with the Tekken franchise and was originally introduced in Tekken 6: Bloodline Rebellion, where he received an extra costume design created by Masashi Kishimoto; this design formed the basis of his appearance in Ultimate Ninja Storm 2.

Lars is the illegitimate son of Heihachi Mishima due to him inherited the Mishima's blood in his veins. He also is a half-brother of Kazuya Mishima.

As the Mishima Zaibatsu waged war on the world, G Corporation, led by Kazuya Mishima, rose from titanic to power and was their main opposition, leading to worldwide conflict. Meanwhile, the Zaibatsu's former Tekken Force soldiers began a coup d'état against the Mishima Zaibatsu. The mastermind behind this coup d'état was Lars Alexandersson, a young and charismatic Tekken Force officer with incredible physical ability and intellect. Most importantly, he is the illegitimate son of Heihachi Mishima, and with the exception of Lars, no one, not even Heihachi, is aware of this piece of information. Lars's goal is to bring peace by defeating his half-nephew, Jin Kazama.

Lars Alexandersson has begun a rebellion to slowly dismantle the Mishima Zaibatsu and G Corporation in order to put an end to the war. During an operation, Lars stumbles across a sleeping female cyborg, identifying her as Alisa Boskonovitch, and G Corporation forces attack, starting a fight and causing an explosion that kills almost everyone present at the scene and leaves Lars with amnesia. Lars escapes with Alisa and the two begin a journey to discover their origins, meeting and fighting several previous Tekken characters. Jin, along with his top subordinates, Nina and Eddy, learns this and issues a manhunt for Lars.

During the journey, Lars reunites with his lieutenant, Tougou, and the two keep in touch. Gradually, Lars begins to recover from his amnesia and remembers that he is the illegitimate son of Heihachi Mishima, now living in solitude but still plotting to retake the Zaibatsu from Jin. Lars locates and confronts Heihachi, prepared to kill him, but relents at the last minute and leaves, turning down Heihachi's proposal that they work together to defeat Jin. Lars eventually comes into contact with Lee Chaolan, who serves as an aid and contact for Lars after Lars rescues Lee's friend, Julia Chang, from a G Corporation facility. At the same time, Kazuya hears of Lars's exploits and sends his men to kill him.

Lars and Alisa's journey eventually leads them to G Corporation, where they are confronted by a squadron of armed soldiers. Tougou and his men arrive to provide back-up for Lars while Lars and Alisa confront and defeat both Anna and Kazuya. Lars and Alisa manage to escape, but Tougou is killed in battle, and Lars vows to avenge him. They then hijack a Zaibatsu subway train to get to the Mishima Zaibatsu's Central Tower, although they are ambushed along the way by Nina and a squadron of Tekken Forces. Despite the odds, Lars defeats the soldiers and kicks Nina off the train.

Lars and Alisa reach the tower and confront Jin, aided by Nina who survived the fall. In a plot twist, Jin reboots Alisa's memory bank and orders her to attack Lars, revealing that she was built the whole time to protect him and that he has been using her to monitor Lars's actions, although the G Corporation attack was not part of Jin's plan. Lars fights and manages to defeat Alisa, who flees the scene. Raven suddenly arrives, having been tailing Lars and Alisa throughout their journey, and offers help, as he saw Jin heading for the desert. Lars accepts.

Lars and Raven locate an abandoned temple in the middle of the desert, said to be the home of the demon known as Azazel, or the Rectifier. Inside the temple, Lars and Raven find and confront Kazuya once again, Kazuya learning, to his disgust, that Lars is his half-brother. After the fight, Kazuya leaves the temple with Anna. Lars and Raven reach the heart of the temple and locate Azazel. During the fight, Azazel tells Lars that he is merely a creation of man, and that it is time for him to destroy humanity to make them atone for their sins, but as he is too injured to continue fighting, Azazel apparently self-destructs. Lars and Raven flee the temple as it collapses.

Once outside, they are confronted by Jin once again, who sets Alisa on them. Lars and Raven defeat Alisa, who reverts to her old self and shares a brief, tearful reunion with Lars before expiring. Jin insults Alisa, enraging Lars and starting another fight. It is then that Jin finally reveals his intentions: having known about Azazel for a long time since Zafina's story, Jin knew that the only way to get rid of his accursed Devil blood curse in him (which is stated that he is still in half-control of it) by awaken Azazel was to fill the world with negative emotions, and the best way was starting a war. Jin also tells Lars that Azazel is not yet dead, and can only be destroyed by someone who carries the Devil Gene, so Jin can be freed from the Gene, saving the worlds from the Gene's schemes and revive all the people who became a victim of the war incidents, even Tougou. Indeed, Azazel, now much stronger, suddenly erupts from the rubble, but Jin, powering himself up with the Devil Gene, approaches Azazel, immune to his attacks, and punches his fist straight through the beast's chest, sending the both of them plummeting to their apparent deaths. Nina appears and contemplates Jin's selfless act, and leaves. Lars and Raven take Alisa's body to Lee, who promises to repair her as soon as possible. Lars bids farewell to Raven before he leaves, who gives Lars his insignia after the revived Tougou gave it to him. Lars then receives a call offering him a new mission. The phone conversation is left a mystery.

Lars continues to fight despite the loss of his fallen comrades, and his bloody rebellion is nowhere near finished. While driving in the Middle East, Lars watches as his birth father's announcement of the King of The Iron Fist Tournament 7. He later finds and rescues Jin from being captured by Arabian soldiers, bringing his nephew to a facility owned by Lee for his recovery. Later, Lars reunites with Alisa after she is brought by Lee. When the three of them watch over Jin, Lars is about to state his intentions for his nephew when they are suddenly attacked by the Tekken Force. Lars and his men hold off the soldiers while Alisa battles Nina. Lee manages to hijack the helicopter carrying Jin, and Lars makes his escape with Alisa as Lee destroys the facility. Lars later realizes that it was Lee's plan all along to to lure out the Mishima Zaibatsu.

Later, Lars is introduced by Lee to an investigative journalist who is trying to uncover the truth of the Mishima Zaibatsu. While talking to Lee, Lars reveals that he intends to use Jin to stop the war, which surprises the journalist. Lars later finds the journalist preparing to kill Jin out of revenge for killing his family. He stops the journalist, restating that Jin is the key to ending the conflict due to the Devil Gene's curse inside him.

A few days later, Lars, Lee, Alisa and the journalist watch Heihachi's broadcasting on Kazuya's devil form while the latter is fightingAkuma. At night, Lars receives a call from the Mishima Zaibatsu, informing him to pick up the journalist at a wharf after his interview with Heihachi. A few hours later, they all watch via Lee's spy satellite as Heihachi and Kazuya fight for the final time inside a volcano.

After Heihachi is killed by Kazuya, Lars stands on the rooftops of a destroyed city with Lee and Alisa, and now they finally see the ruins across the world without Heihachi. He then sends out an awakened Jin to find and kill Kazuya, as he is now the only one who can stop his father.

Lars has a heroic personality, as he led the coup d'etat against the Mishima Zaibatsu. He also has the fighting spirit and determination of his half-nephew, Jin Kazama, and the charisma of his adopted brother Lee Chaolan, but is the complete opposite to Heihachi and Kazuya, being much like Jun Kazama in terms of personality. He strongly resembles Jin Kazama at times. Lars' actions and surroundings fit the mold of an archetypical hero.

Lars' personality ranges from calm to angry at various moments, and his words and actions are that of a soldier. 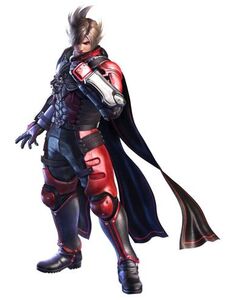 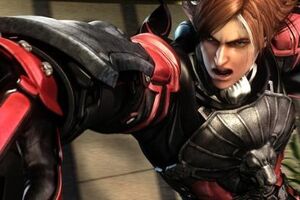 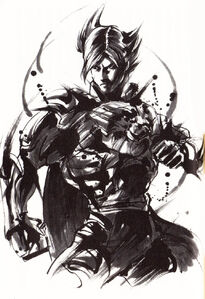 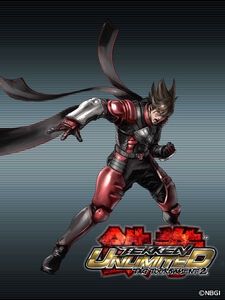 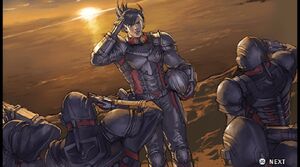 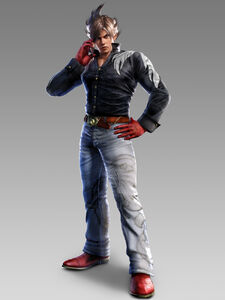 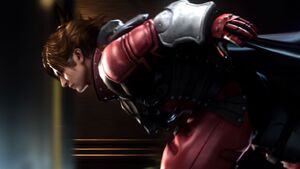 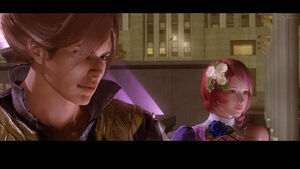 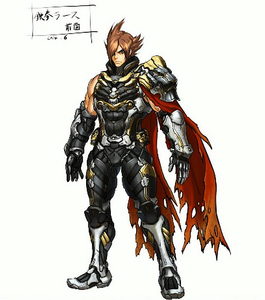 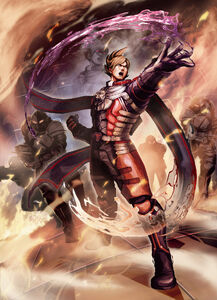 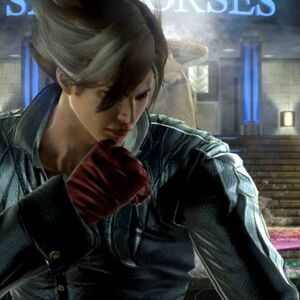 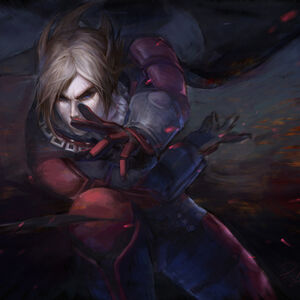 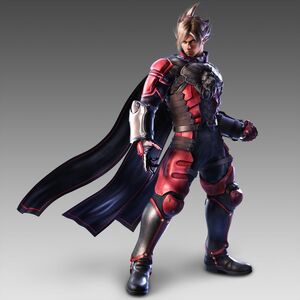