Latika is the heroine from the Oscar-winning movie Slumdog Millionaire.

Latika is an orphan girl living in the slums of Mumbai. She first comes across Jamal when he invites her to join him in his shelter from the rain despite his brother Salim's objections. This happens after Jamal and Salim are orphaned during the anti-Muslim riots. Like her new friend, Latika suffers unjust mistreatment and abuse.

Jamal, Latika, and Salim are all lured to a child labor ring compound ran by local crime boss Maman. At the compound,  Jamal is taught to sing, Latika to beg, while Salim is groomed to be an enforcer. Salim betrays Maman when he discovers he is about to blind Jamal to turn him into a blind beggar and the three of make an escape, but, blinded by his jealousy, Salim allows Latika to be recaptured by Maman to Jamal's fury.

Jamal and Salim (now teenagers)discover that Latika(now called Cherry) was raised by Maman to be a prostitute and rescue her. Salim kills Maman in the escape and leverages his skills and  gets a job from Javed, an evil Mumbai crime lord and Maman's rival. As soon as they arrive at their hotel room, Salim orders Jamal to leave him and Latika alone. Jamal refuses and Salim pulls his gun on him. He leaves after Latika convinces him to go away so he wouldn't get hurt. Maman's men track Salim and Latika to the hotel and they are forced to flee. With that, both are seperated from Jamal for many years.

A now adult Jamal manages to find Salim and Salim leads Jamal to Latika who is now living with Javed as his concubine, whom he regularly abuses. Once Jamal finds and  confesses his love for Latika, Latika rebuffs him and orders him to leave due to the dangers of Javed, but Jamal promises he will wait at the Train station for him every day at 5 o'clock. After a while, Latika escapes and meets Jamal at the train station but is recaptured by Javed's thugs. Salim slashes her face with a knife as punishment. That is when Jamal decides to win her heart by serving as a contestant on Who Wants to Be a Millionaire?.

After Jamal tells the police the story of his life when he is interrogated for cheating, the chief tears up the arrest warrant and allows him to return to the show. Latika escapes, courtesy of Salim, who has a change of heart. Jamal wins the final round and as he does, Salim unselfishly gives up his life for his brother when he turns against Javed and shoots him, only to be killed by the crime lord's men. Latika is reunited with Jamal at the train station. They kiss and dance to the song "Jai Ho."

Latika as a little girl 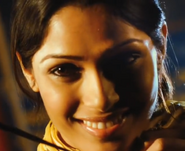 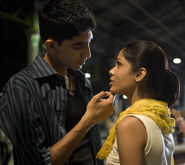