In Ducktales, Launchpad served as pilot to Scrooge McDuck and in Darkwing Duck, he served as Darkwing Duck's trusted sidekick and pilot. Launchpad was Darkwing's biggest fan and begged Darkwing to be his sidekick several times before Darkwing eventually accepted him. He refers to Darkwing as "DW" and Darkwing often calls him "LP".

Launchpad is very simple-minded, laid-back, very loyal, modest and hard-working. Launchpad is the designer and builder of the Thunderquack, Darkwing's airplane. Even though Lauchpad is a skillful pilot he is known for his crash landings.

In the first cliffhanger, formerly a TV movie, Launchpad is the tritagonist. He tries to become Darkwing's sidekick, but the hero wouldn't allow it, because Launchpad's clumsiness lets Taurus Bulba's gang get away on a train.  Eventually, he helps Darkwing and Gosalyn fight the bull, and becomes a trusty sidekick at last.

In the second cliffhanger, just like Gosalyn, Launchpad is reduced to a supporting character.  However, they still stick around to help form the Justice Ducks.

Launchpad McQuack first appeared as Scrooge McDuck's pilot in the DuckTales cartoon series. He later appeared in the spin-off series Darkwing Duck as Darkwing's sidekick. He is usually depicted as brave, good-hearted, and incredibly dim-witted. While a skillful pilot, he is very bad at landing and almost always crashes instead but, to his credit, he and his passengers always survive such crashes, and he takes a strange sort of pride in being able to crash any imaginable aircraft ("If it's got wings, I can crash it!" he has proudly proclaimed). He was voiced by Terry McGovern. The character sometimes appears in Walt Disney World's Magic Kingdom and Disney's Animal Kingdom for meet-and-greets, though his appearances have been rarer since the Disney Afternoon cartoon block ended production.

In DuckTales, Launchpad acted as Scrooge McDuck's personal pilot. His imposing physical stature meant that he sometimes acted as a bodyguard for Scrooge as well, though his role was later taken over by Gizmoduck. In earlier episodes, he is idolized as a hero by Huey, Dewey and Louie's friend Doofus. In later episodes he appears less frequently. Often when a DuckTales story adapted an original Carl Barks story, Launchpad would be used as a stand-in for Donald. While Launchpad never argued with Scrooge the way Donald might, he would often end up in Donald's role as physical laborer or man of action. Launchpad was the subject of several episodes devoted to exploring his character in more detail, including one that explains how he came to work for Scrooge McDuck.

Launchpad is a slightly different character in Darkwing Duck. He is notably less competent and less of a man of action, perhaps to keep him from upstaging Darkwing. His design is changed somewhat, with a much larger beak, a generic human tongue regularly used on other cartoon characters as opposed to the somewhat semi-realistic Duck tongue used on the Disney Duck characters and a more muscular torso. Launchpad becomes slightly more intelligent, probably to compensate for Darkwing's tendency toward total self-absorption. Launchpad leaves his job working for Scrooge McDuck in the series pilot, "Darkly Dawns the Duck". Meeting Darkwing in his hangar, Launchpad claims to be the underappreciated superhero's biggest fan. Launchpad offers to be Darkwing's sidekick several times before the hero eventually accepts him. Launchpad is the designer and builder of the Thunderquack, Darkwing's custom air transport (which, oddly enough, he almost never crashes). In the series, Launchpad is depicted as living with Drake Mallard. There is no explanation of how Drake accounts for Launchpad's presence in his household to his neighbors the Muddlefoots. Launchpad doesn't disguise his identity when he is out with Darkwing Duck fighting crime. He also, like Drake, doesn't appear to have any sort of job beyond his crime fighting duties. 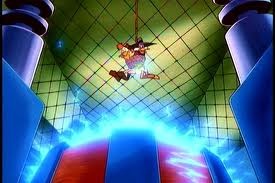 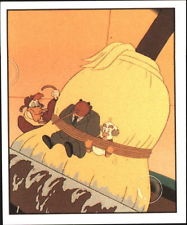 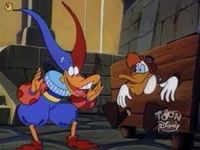 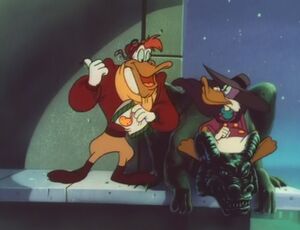 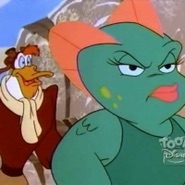 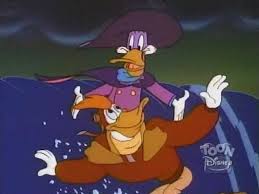 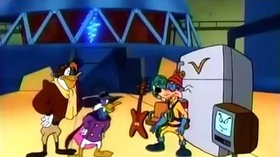 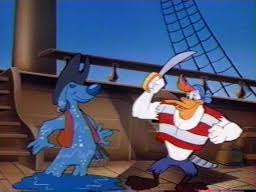 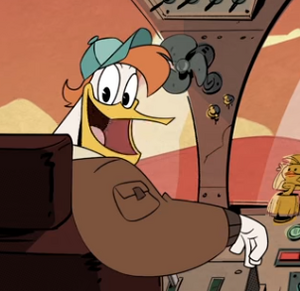