Honey
Little Minx
An Agent of Some Kind

Being with her family

Laura Barton is a character from the 2015 film Avengers: Age Of Ultron and the 2019 film , Avengers: Endgame.

She is portrayed by Linda Cardellini, who also played Velma Dinkley in the 2000s live-action Scooby-Doo movies, and voiced CJ in Regular Show, Wendy Corduroy in Gravity Falls, and Megan Sparkles in Sanjay and Craig..

She is the wife of Clint Barton, with whom he had two children (Cooper and Lila) and was waiting a third - originally Natalia in homage to Clint's fellow agent and friend Natalia Romanova, but renamed Nathaniel Barton once found out to be a boy.

She lived in secret at a farm, helped by S.H.I.E.L.D. having previously erased their records about Laura to ensure her safety. Laura would aid the Avengers in staying at her and Clint's home with her children, and have Nick Fury as her guest. After the defeat of Ultron, Clint returned home to see his third son, and decided to retire from both S.H.I.E.L.D. and the Avengers.

Despite his retirement, Clint would return to aid Captain America against the Sokovia Accords, and would leave Laura with the children. Clint participated in the clash of the Avengers, but was arrested alongside Falcon, Scarlet Witch, and Ant-Man for resisting to sign the accords. After his arrest, Clint was freed from the Raft by Rogers, and he would return home to Laura, and his children.

After the events of Infinity War, it can be presumed that she, alongside her children, were killed by Thanos' finger snap. She and her family were enjoying themselves outside their homes, but were suddenly turned into dust as Clint became confused and scared of their disappearance. Clint became a rogue vigilante after the loss of his family, but would return to the Avenges years later.

In 2023, she was resurrected alongside everyone effected by Hulk, and reunited with her husband post the battle of Earth. She and her family attended Tony Stark's funeral with all his allies and friends, honoring his sacrifice.

Laura in Avengers: Age of Ultron. 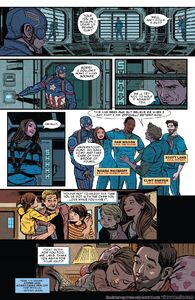 Laura in the comics.

The Barton family attend Tony Stark's funeral.
Add a photo to this gallery

Retrieved from "https://hero.fandom.com/wiki/Laura_Barton_(Marvel_Cinematic_Universe)?oldid=1677055"
Community content is available under CC-BY-SA unless otherwise noted.