Hanging out with Ichika and Charlotte, Sneaking into Ichika's room

Laura Bodewig is an antagonist-turned main protagonist in the light novel and anime series Infinite Stratos. She is a first year student at the IS academy and is the IS cadet representative from Germany. A genetically engineered super soldier, Laura is a member of the German military and holds the rank of second lieutenant. Laura was under Chifuyu Orimura's guidance when the latter was working with the German army's IS division and holds Chifuyu in high regard.

She has long silver hair, a red right eye, and a black eye patch over her yellow left eye. She was the result of a failed nanomachine experiment that was meant to help her become a better IS pilot.

Her IS Academy uniform is modified version of the standard uniform, with baggy pants and high boots; this is befitting of her former post as an army officer. For her IS Practice and battles, she wears a gray version of the training uniform. At night, she now wears black cat pajamas that Charlotte got her. Ichika has remarked that Laura has a doll-like cuteness around her and Ichika said that her eyes look like gemstones.

Laura is initially seen as a tough girl who absolutely despised Ichika for (indirectly) making his sister, Chifuyu Orimura, forfeit the match Laura believed Chifuyu should have rightfully won. She has a major superiority complex surrounding her identity as a super soldier, as she often remarks that surrounding people's abilities are second-rate. She insulted Cecilia Alcott and Lingyin Huang during their first fight, saying that she has a hard time believing people like them possess 3rd Generation IS's. She comments that they come from countries that boasts of numbers but no talent (Lingyin), or whose only redeeming quality is their ancient culture (Cecilia). Despite her arrogance, she can acknowledge when she's been beaten or outclassed, both shown after her first encounter with M where she admitted that she and Cecilia wouldn't be able to catch M or beat her if they could.

Having been trained by her, Laura idolizes Chifuyu to the point of worship. When she is first introduced she often seen trying to persuade Chifuyu to leave the IS Academy and return to Germany, as she believed her skills are being sullied by the students and staff who don't appreciate her and that she should be the only one who can train under her.

Having been raised in the army, she does not understand the workings of a normal life, seen as when she calls Ichika her "Wife", and when she comments that two hours of seiza is nothing compared to torture (Ichika wondered what counts as torture). Similar to Houki, Laura is rather shy when it comes to her looks despite her pride. While never having been interested in her looks or clothes before, she started thinking about them more in order to get Ichika's attention. When she does, she becomes very happy and unfocused on everything else except what Ichika has said to her. Strangely, she doesn't mind being naked in front of him.

After she has fallen in love with Ichika, Laura had a big change in her personality, she went from being a cold girl to a friendlier and more sympathetic girl. She not only changed her attitude to Ichika, but also to Charlotte, Houki, Lingyin and Cecilia, who were initially her enemies who became her friends and normally she gets along with them.

Laura is quite honest and straightforward with her thoughts and intentions; she will usually come out and say what she is trying to do instead of hiding it. A good example would be when she kissed Ichika right in front of the entire Class One right after falling in love with him. This self-confidante is usually envied by the other girls, as they were too embarrassed to admit to their feelings or reason while she wasn't. Although, she still can be shy sometimes when trying something new like wearing a swimsuit or a dress.

Having been designed and raised as a test-tube baby for the army, Laura possesses heightened reflexes and a great deal of military tactics to deal with more experienced soldiers that are older than her, even before her introduction and gaining an Schwarzer Regen. She very skilled in most unarmed and armed combat. Her specially is with combat knives and is good enough to fight equally against Houki's swordsmanship. Cecilia ranks Laura as the strongest of the main cast. She demonstrates this by easily defeating Cecilia and Lingyin, both being A-Rank representatives. She was also trained by Chifuyu Orimura, an accomplished pilot of her own right, which gives a testament of her skills. 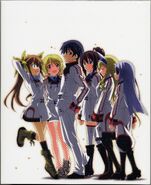 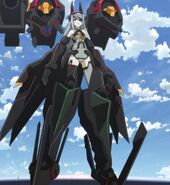 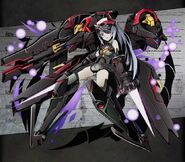