Spend time with her family and friends.

Teach kids about the love of God

Childish hero
Laura Carrot is one of the major protagonists from VeggieTales. She is the best friend of Junior Asparagus. She made her first appearance in the third episode, Are You My Neighbor? and has became one of the major characters in the series.

She is voiced by Kristin Blegen, Megan Murphy, and Keri Pisapia in the original series, Tress MacNeille in the VeggieTales in the House series and currently by Kira Buckland in The VeggieTales Show.

Laura is a carrot with yellow hair that she almost always keeps in pigtails. Her design has changed throughout the series: First, she had freckles. Later in the series, she had fewer hair bands in her pigtails and no freckles. She had a blue bow on top of her hair. In VeggieTales in the House and VeggieTales in the City, she is given freckles again, and has light-blue eyes.

Laura is kind like the rest of the cast, as she always cares about her friends. She is also good towards her best friend, Junior Asparagus. Although they get into bad arguments sometimes, they always try to make up and be best friends again. 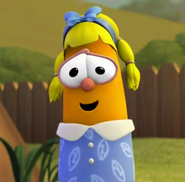 laura carrot as Miram
Add a photo to this gallery

Retrieved from "https://hero.fandom.com/wiki/Laura_Carrot?oldid=1944209"
Community content is available under CC-BY-SA unless otherwise noted.