Stop BOB at any cost.

Laura Palmer is a fictional character from the television series Twin Peaks, created by David Lynch and Mark Frost. Her death was the catalyst for the events of the series. She is also the main protagonist of the prequel film, Twin Peaks: Fire Walk With Me.

Laura (played by Sheryl Lee, who also played her cousin Maddy Ferguson), was well known and loved in Twin Peaks; she volunteered at Meals on Wheels, was her school's Homecoming Queen, and was (apparently) the darling of her parents, Sarah and Leland. However, the series gradually revealed that Laura led a double life — she was a cocaine addict, a victim of child abuse and, briefly, a prostitute at One Eyed Jacks, a casino/brothel just north of the Canadian border. Officially involved with Bobby Briggs, the high school football team captain, she was also engaged in a secret relationship with James Hurley. She had also had sexual encounters with other Twin Peaks citizens, such as businessman Ben Horne and trucker/drug dealer Leo Johnson.

The discovery of Laura's body in the pilot episode of Twin Peaks brings Special Agent Dale Cooper to town to investigate her death. Her murder and its effect on those around her propel the first season and the first 8 episodes of the second season. Laura remains a prominent character afterward, as her death exposes many secrets related to her, and also — in some cases — unrelated, such as the Packard mill conspiracy. Laura also appears in Cooper's dreams, offering cryptic clues as to the identity of her killer.

Laura's diary is uncovered in the first episode, but her secret diary is not recovered until later. The latter contains passages suggesting that she had been abused by a malevolent entity named BOB since she was a child, who wanted to be close to her, or even be her. In her diary she sometimes referred to BOB as a friend of her father's.

In the prequel/sequel "Fire Walk With Me", Laura's spirit makes the transition to the afterlife when an angel appears to her, showing that her nightmare was finally over.

During the second season, the identity of her murderer was revealed: her father, Leland, who had sexually abused her for years while being possessed by BOB. Before his death in police custody, Leland tells Cooper and the others that he hadn't been aware of his own actions during the times BOB possessed him. As Leland dies, Laura appears before him in a vision, and it is implied that she forgives him and welcomes him to the afterlife.

Laura appears inside the Black Lodge during the series finale, as both herself and an evil doppelgänger version.

Laura's heroic role comes into play in the very beginning of the series chronologically, with the role of her demise.

Laura seemed to had known of her imminent demise for some time, and chose this over the latter, which would have been becoming a vessel for BOB to travel in. However, knowing the decision she would make also meant that she knew somewhat of the events that would transpire after her death, which she puts in her diary. In her dream, she informed FBI Agent Dale Cooper of the killer's name, which later came into play in finally capturing Leland. It would seem she died so that BOB would finally be stopped, however, he may have had the upper hand, he killed his vessel upon his capture, and at the end of the series, took Dale Cooper as one. Despite this, she achieved her personal goal through her death, to not become a victim of BOB's possession. 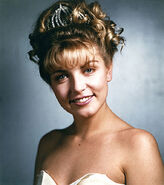 Add a photo to this gallery
Retrieved from "https://hero.fandom.com/wiki/Laura_Palmer?oldid=1701306"
Community content is available under CC-BY-SA unless otherwise noted.