Working out, spending time with her family, hanging out with Corey

Warrior Parent
Laurel Lightfoot is the tritagonist of the 2020 Disney/Pixar animated feature film, Onward. She is the mother of Ian and Barley, as well as the wife of Wilden Lightfoot.

She is voiced by Julia Louis-Dreyfus, who also played Princess Atta in A Bug's Life, another Pixar film and Elaine Benes in Seinfeld.

Laurel is an elf with a plump, yet curvy figure. She also wears glasses, a cream sweater, jeans, and small golden earrings.

Laurel is a loving mother who cares for her sons deeply. She is cheerful, warm, caring, and very understanding towards her sons and their respective quirks. 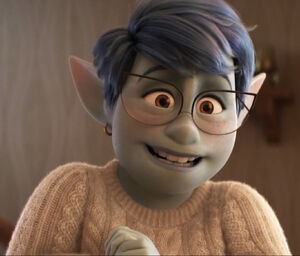