Prince of the Lion Tribe

Laval is the main protagonist of Legends of Chima, both the tv series and lego theme. He is a prince and warrior of the Lion tribe in Chima. He is the son of Lagravis. He is best friends with Cragger and Eris. Laval is expected to be a mature lion warrior but he is shown to act like a kid, forgetting his duties.

He was voiced by Scott Shantz.

Laval is the headstrong prince of the Lion tribe who still has a lot to learn to about what it means to be a leader. He may want others to see him as a powerful and responsible adult, but he's still a big kid at heart. Duty doesn't always take priority over having a good time. But what's the harm in pulling a little prank every so often? Like a lot of kids, he has an insatiable curiosty and a relentless flair for challenging the rules. This can be a problem since the Lions are all about following and challenging the rules. Can Laval figure this out and become the great warrior and leader his tribe expects of him?

After The Battle of The Chi

The prince of the Lion Tribe, Laval was once very headstrong and more interested in having a good time than anything else. But the battles over CHI have helped him to grow up a little bit. While he still loves nothing more than a new adventure or a chance to have fun, he also understands more about the duties and responsibilities of a prince. He showed that by his willingness to put the past aside and ally with Cragger against a common threat. As the leader of a new, united team of heroes, the fate of Chima rests on his shoulders. 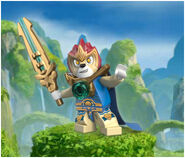 Add a photo to this gallery
Retrieved from "https://hero.fandom.com/wiki/Laval?oldid=2234583"
Community content is available under CC-BY-SA unless otherwise noted.