Heroes Wiki
Register
Don't have an account?
Sign In
Advertisement
in: Articles under construction, Genderless, Video Game Heroes,
and 14 more

Help Euden on his quest

Laxi is a character from Dragalia Lost.

She was voiced by Inori Minase in the Japanese version, and by Anna Van Hooft in the English version.

She is an android that resembles a human with white skin, white hair and purple eyes. She dresses in black and white and wears black gloves and boots and dones a black and red beret.

Her primary means of attack is use of a katana and is a flame-type adventurer.

Several hundred years ago, the Dyrenell Empire commissioned a scientist to create an android army, two of these androids being Laxi and Mascula. However, the scientist did not take kindly to their ill intent. Sometime after this the android army was deactivated.

In the present, sometime after the androids were reactivated, Laxi’s heart began to malfunction, which led to her going berserk.

After the heroes manage to subdue her, Mascula gave up his heart to fix her.

Mascula however is not truly gone and can actually speak through her and anytime he speaks, his dialog will be marked with "▷" & "◁" 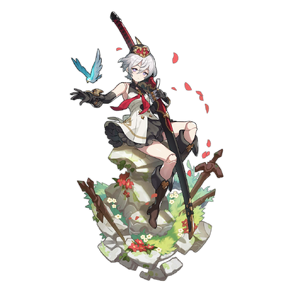