Force Makarov to step down and take over the Fairy Tail guild and restructure it completely (failed; formerly), Protect Fairy Tail and its honor

Since his childhood, Laxus vowed to become stronger and beat his grandfather so he could prove himself and become a man in his own rights. His father was kicked out of the guild because of being a danger to Fairy Tail. This incident enraged him as he tried to convince Makarov to bring his father back since they were still family members, but despite this, Makarov refused. Laxus' father at the time set up his own guild, the Dark Guild Raven Tail. Laxus attained the rank of S-Class Mage in X778, at the age of 1Like many members of the guild, Laxus was a part of Fairy Tail since he was a child, given that he is also Makarov's grandson. Laxus constantly felt trapped in a shadow by being the grandson of Makarov and as a result, felt he never got the credit he deserved.

Laxus was initially portrayed as arrogant, overbearing, selfish and prone man to make fun of his own comrades. He believed himself to be the strongest member of Fairy Tail, and looked down on those he considered weak, heavily reprimanding their weakness and even resolving to hurt them whenever they stepped in his path.

Laxus seemed to care very little about his fellow guild mates, usually suggesting that they had to give him something in order to acquire his help: in one of such instances, when he was asked for help during the Fairy Tail vs Phantom Lord confrontation, he also proved himself to be quite lecherous, offering to help his comrades out only if the "big-boobed" Lucy Heartfilia had become his girlfriend and Cana Alberona had stripped before him.

Not even his trusted Thunder God Tribe were spared of this treatment, as seen when Laxus almost hit Freed Justine with one of his lightning attacks for contradicting him. The only things he appeared to truly care about were the strength and reputation of Fairy Tail, and he became enraged every time someone made fun of it. During his battle with Natsu Dragneel and Gajeel Redfox, he was shown entering a Berserker-like state, in which he showed the most ruthless side of him, being willing to laugh off Makarov’s possibly imminent death and to annihilate not only Fairy Tail, but also all of the inhabitants of Magnolia, for his goals.

In his adolescence, Laxus was a truly kind boy, very attached to his paternal grandfather Makarov, and greatly admired Fairy Tail. This, however, changed with the excommunication of his father from the guild, and Laxus’s growing thought and suspicion that his fame was a result of being Makarov’s grandson, and not of his own skills, something that made him eager to prove himself as a strong Mage in his own right.

However, after his excommunication it appears that his attitude has changed. He seems far more light-hearted and serene, and apparently has grown fond of the guild in his current state. He was also willing to take all the responsibility of the crimes for himself, in order for the Thunder God Tribe to remain members of the guild, even encouraging them for the time being. Even before his excommunication, Freed claimed that Laxus inherited not only Makarov’s Magical prowess, but also his heart for caring for comrades, something shown when none of his guildmates or the townspeople from Magnolia were affected by his Fairy Law. During the Fantasia parade, when Makarov, alongside the whole Fairy Tail, silently told Laxus that he would always be watching over him right before his departure, he shed tears and was ashamed of his previous actions.

While he is a likely candidate to succeed his grandfather in leading Fairy Tail, Makarov initially believed Laxus' intentions were not yet right, something proven right when Laxus stated that, once he had inherited leadership of Fairy Tail, he would have eliminated all the weak members to create the strongest guild in the country. This, however, seems to have changed after his expulsion and “redemption”, as Makarov was seen entrusting his will to him from afar after his brief confrontation with Hades.

As a Dragon Slayer, Laxus suffers from motion sickness, although he is extremely ashamed to admit it.

Lightning Magic: Laxus’ signature Magic over which he possesses great mastery. It allows him to produce, control and manipulate lightning and electricity at his will. Through its use, Laxus can not only generate lightning from his body,but also make it appear from almost anywhere to strike his opponents, taking them by surprise.By generating electricity on different parts of his body, he’s capable of making his attacks in melee deadlier,and of propelling himself around to gain extra momentum.The bright light from his lightning can be also used to momentarily blind enemies. In addition, much like other Elemental types of Magic, Lightning Magic allows Laxus to turn his own body into lightning, in order to evade enemy attacks, move around at high speed and strike every opponent crossing his path.

Lightning Dragon Slayer Magic: A form of Dragon Slayer Magic which gives Laxus the power and characteristics of a Lightning Dragon, along with a Dragon Slayer's signature ability to eat external sources of his element to heal himself and regain power, thus making him immune to lightning.His attacks, still based on electricity like those of his standard Lightning Magic, are shown to be very destructive; however, they may be redirected by metal objects acting as "lightning rods", as shown when Gajeel used his Iron Dragon's Club to save Natsu from Lightning Dragon's Heavenward Halberd. Laxus has been keeping the true nature of his Magic secret from all of his guildmates, even Makarov, stating that he is fed up with his grandfather's lectures. As it turns out however, the Magic was actually implanted within him through the use of a Dragon Lacrima by his father, as he was "frail" when he was younger, despite his Magical potential. This classifies Laxus as a Second Generation Dragon Slayer. 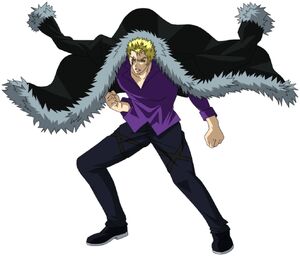 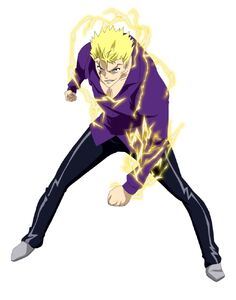 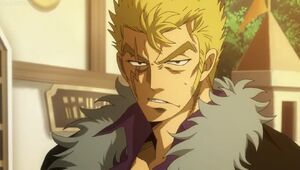 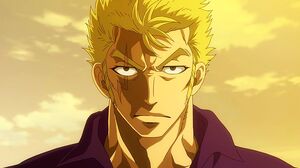 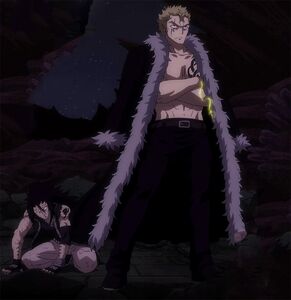 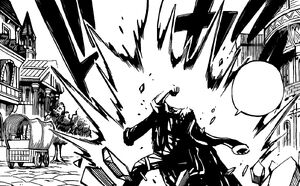 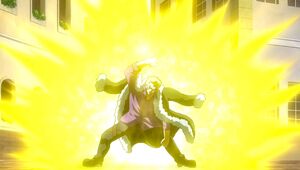 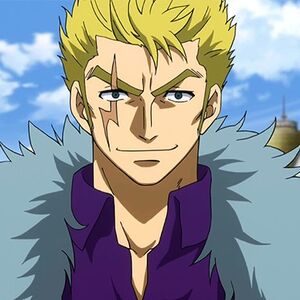 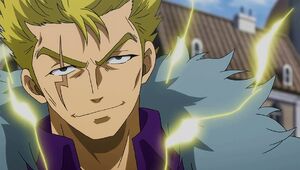 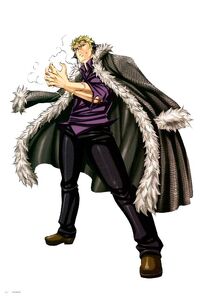 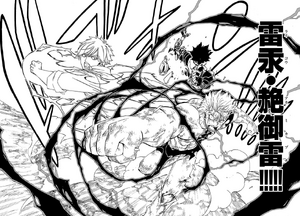 Retrieved from "https://hero.fandom.com/wiki/Laxus_Dreyar?oldid=1800387"
Community content is available under CC-BY-SA unless otherwise noted.