Speedster
Western Hero
Lazy Luke is one of the eleven racers in Wacky Races.

Together with Blubber Bear, his sidekick and co-driver, they drive the Arkansas Chugabug, the #8 car.

In many cases, Lazy Luke is like an Anti-Dick Dastardly. While Dick is generally evil and smart enough to come up with his own plans, Luke, being based off of a stereotypical hillbilly, is rather dumb and thus, it's very unlikely he could come up with any kind of plan, and is also one of the heroes, much like the other racers. Because of this, he may be viewed as the most innocent of the lot, further contrasting him with Dick, who is corrupt.

Luke is a old and skinny hillbilly, he has black eyes that are shut whenever is asleep, a long nose and a beard.

He wears a red buttoned shirt, light brown/yellow pants with ripped ends and suspenders, a beige hat, a pipe and he´s always barefoot. 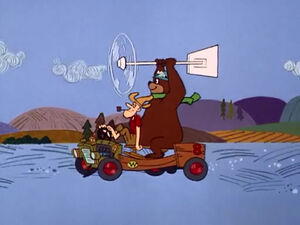