Spending time with his family.
Hanging out with Bugs Bunny.

Get his son, Dom back.

Form a basketball team to defeat Al-G & the Goon Squad in order to bring all people back to the reality (all succeeded).

LeBron James is the main protagonist of the 2021 Warner Bros. hybrid film Space Jam: A New Legacy the sequel to the 1996 classic film Space Jam.

LeBron is portrayed by his real-life self as an adult and by Stephen Kankole as his younger self (13 years old). LeBron also voiced Gwangi from “Smallfoot”.

While growing up, LeBron was dedicated to basketball. His passion for the sport was so strong that he chose this over his own personal desires. In other words, he never followed the "do me" rule. He tried to encourage his sons into doing the same. While Darius had no problem with this, Dom wasn't happy since he wanted to pursue his passion for video games.

When LeBron and Dom were sucked into the Serververse and the former was sent to Tune World to form a basketball team, he met Bugs Bunny. Unlike Michael Jordan, who initially denied his existence at first since he was a cartoon, LeBron was ecstatic to meet Bugs and hugged him. However, when LeBron wanted to recruit a bunch of powerful Warner Brothers characters for his basketball team, i.e Super Man and Iron Giant, Bugs secretly used the opportunity to reunite with his friends after Al-G separated him. This jeopardized their friendship, as LeBron became mad and tried to assert dominance over the Tune Squad, something that angered Bugs in return as he then called LeBron "that kind of king."

During the first half of the game, the Goon Squad is able to get in the lead due to scoring over 1,000 points and LeBron's selfishness. However, he then realized that forcing the Tunes to play like him rather than be themselves was the problem and he allowed them to get "Looney". Afterwards, LeBron becomes a better team player and the Tune Squad is able to catch up with the Goon Squad. He then shows a new playful side to him by chest bumping Foghorn Leghorn and giving Taz multiple high fives. This helps LeBron realize what he's been doing to Dom and he apologizes to his son.

In the end LeBron becomes a much better basketball player and father, as he takes Dom to the E3 camp he's been wanting to go to. He also formed a close bond with Bugs Bunny, as he was happy that the latter was alive after he was thought to be deleted and he allowed him and his friends to stay at his house in the real world.

He got invited with his family to the Warner Bros. studio and is offered to become a movie star, but LeBron dismisses the idea, while Dom shows an interest in the studio's software, particularly its A.I., Al-G Rhythm. Dom expresses an interest in a future with Warner Bros, leading to an argument with his father over basketball camp where the two storm out. Al-G, who has secretly become self-aware and desires more recognition from the world, lures the two to the basement and traps them inside a virtual reality, where he takes Dom prisoner and orders LeBron to assemble a basketball team made from fictional characters owned by Warner Bros to challenge him to a game in a day's time, telling him that he will only be released if he wins, and sends him through the virtual space where he lands in Tune World. He finds Tune World deserted save only for Bugs Bunny, who explains that Al-G persuaded the rest of the Looney Tunes to leave their world. Using a spaceship belonging to Marvin the Martian, LeBron and Bugs travel to different worlds based on Warner Bros properties such as DC Comics, Harry Potter, Casablanca and Game of Thrones to locate and recruit the rest of the Looney Tunes, such as Daffy Duck, Lola Bunny and Porky Pig, into the Tune Squad.

LeBron insists on coaching them on fundamental basketball. He and the Tune Squad meet with Al-G's team, the Goon Squad, comprised of upgraded avatars of professional basketball players with superpowers and led by Dom. To further the stakes, Al-G livestreams the game and abducts countless viewers, including LeBron's family, into the virtual reality, and says that if the Tune Squad lose, the viewers will remain there for eternity and the Looney Tunes will be deleted permanently.

After he realizes his mistake and allows Bugs to devise the strategy for the second half, using their cartoon physics to catch up with the Goon Squad. During a respite, however, LeBron confronts Dom and tells him he no longer wants to stand in the way of his dream. Since Al-G takes over the Goon Squad and uses his own abilities to take control of the game. Dom suddenly discovers the only way to win the game is to use the move he previously showed LeBron, even though he will be deleted. However, during the final seconds of the game, Bugs performs the move, sacrificing himself and enabling Dom to help LeBron score the final point, winning the game and posterizing Al-G, erasing him forever. The James family and the abducted citizens are returned to the real world, while in Tune World, Bugs bids farewell to his friends before he disappears. In the real world, LeBron comes to see his family in a different light and supports Dom's decision to become a video game designer. After dropping his younger son off at E3, he is approached by Bugs, who actually survived due to being a Tune (tunes can survive anything). He asks LeBron to put him up for a little while. LeBron agrees, but Bugs goes on to ask if he can invite the rest of the Looney Tunes over. 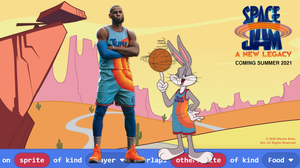 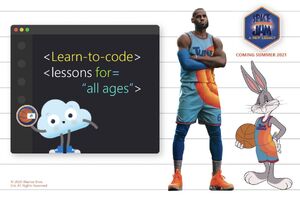 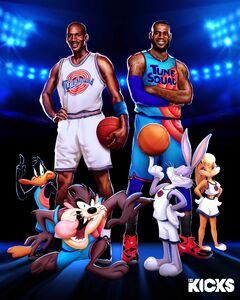 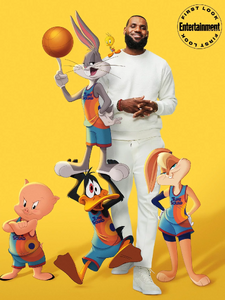 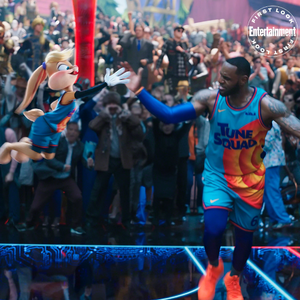 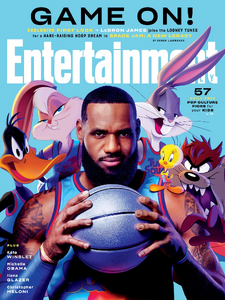 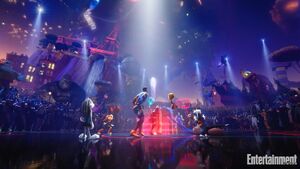 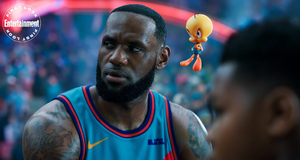 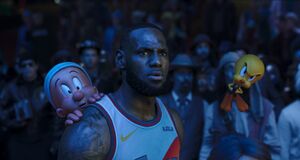 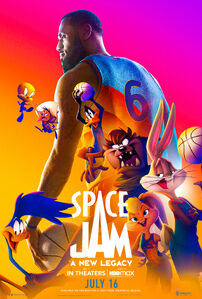 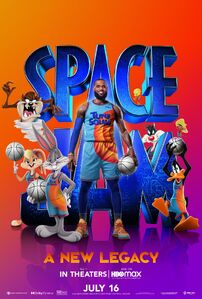