Aid and please Gaston in any way possible (formerly).

LeFou is the secondary antagonist turned supporting character in the 2017 live action adaptation of the film, He is the (ex) friend and right-hand man of Gaston.

He is portrayed by Josh Gad who also voiced Louis from Ice Age: Continental Drift, Olaf from the 2013 film Disney's Frozen, Chuck from The Angry Birds Movie and Ludlow Lamonsoff in Pixels.

Just like his animated counterpart, LeFou tends to aid Gaston in running the local tavern and being under his thumb. He even once sang about Gaston's greatness to the village in order to cheer him up after the latter's failed attempts to woo and marry Belle, and finds Maurice's ravings about the Beast to be quite ridiculous.

However, as the plot unravels, LeFou starts to become uneasy over Gaston's true nature, as he objects over Gaston's intent to leave Maurice to die in the woods forever. Even when Maurice returns after being rescued by the local beggar woman Agathe and accuses Gaston for attempted murder, Gaston secretly silences LeFou from testifying against him before convincing the villagers that Maurice must be locked away in the local asylum for his "delusions", much to LeFou's guilt.

Eventually, Belle returns and proved her father's sanity by revealing the Beast's existence with a magic mirror, which made LeFou and the villagers realize that Maurice was telling the truth. Despite this turn of events, Gaston turns the table by stealing the magic mirror and convincing the villagers to help him take down the Beast. After Gaston locks up Belle and Maurice in the asylum carriage, LeFou starts to develop second thoughts, but is forced into compliance when Gaston threatens to have him locked up as well. As Gaston leads the villagers to the castle, LeFou feels uncomfortable in raiding the Beast's castle, feeling that Gaston is becoming more deranged than usual.

As the villagers break into the castle, LeFou inadvertently instigates a battle after seeing Chip, the talking teacup that Maurice mentioned earlier. Noticing Mrs. Potts standing next to Chip, LeFou wrongfully identifies her as Chip's grandmother, which left Mrs. Potts insulted as she signals the servants' ambush against the villagers. During the battle, the coat rack Chapeau taps on Gaston's shoulder as he prepares to attack him, making Gaston use LeFou as a human shield who Chapeau inadvertently brawled several times before the latter ends up being accidentally smacked by the harpsichord Maestro Cadenza. LeFou begs for help, but Gaston just left him for dead as he went to the West Wing to kill the Beast himself, much to LeFou's shock (even Cadenza himself is shocked by this act of betrayal). Finally having enough, LeFou defected to the servants' side, even saving Mrs. Potts from being fallen before the villagers flee away in humiliation and defeat.

Following Gaston's death, LeFou witnessed the curse being broken by Belle's expression of her love towards the Beast, which transformed the Beast and his servants back to normal. LeFou is even surprised to see that the returning villagers have recognized some of the servants as their lost loved-ones after regaining their memory following the curse being broken. In the end, LeFou happily dances with the crowd at the final ceremony, particularly with Stanley.

Unlike his animated counterpart, LeFou acts as a voice of reason for Gaston, whenever he tries to do questionable facts. LeFou is shown to be more friendly with Maurice, expressing concern for him when Gaston left him with the wolves and expressing genuine relief when he is safe. As Gaston becomes more deranged than usual, LeFou is shown struggling between his loyalty to him and his moral conscience. Finally, when Gaston used him as a human shield and leaves at the mercy of the servants, LeFou finally turns against him and he redeems himself when saving Mrs Potts' life, and even wholeheartedly joins the servants in fighting off the villagers after being comforted by her words.

LeFou and Gaston spotting Belle through a telescope.

"She's so well-read and you're so....athletically inclined." 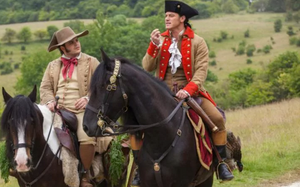 LeFou arriving in the village. 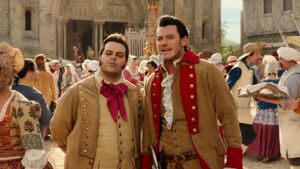 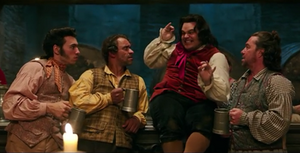 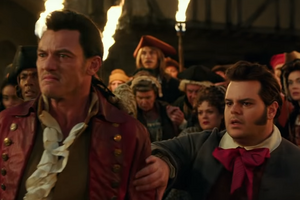 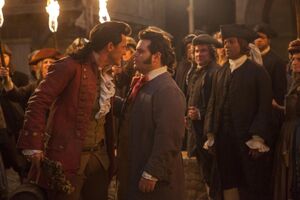 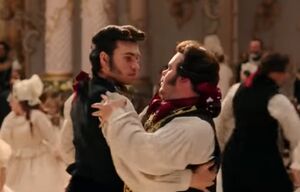