Heroes Wiki
Register
Don't have an account?
Sign In
Advertisement
in: Kingdom Hearts Heroes, Brutes, Friend of a Villain,
and 15 more

making friends and spending time with them

Lea is the original persona of Axel, and a close friend of Isa, Saïx's original persona. He appears in Kingdom Hearts Birth by Sleep and Kingdom Hearts Birth by Sleep Final Mix as a teenager, alongside Isa, and then in Kingdom Hearts 3D: Dream Drop Distance as an adult. In the Japanese version, he was voiced by the late Keiji Fujiwara. In English he is voiced by Quinton Flynn (who also voiced Iruka Umino in Naruto and Silver the Hedgehog in the Sonic The Hedgehog franchise.)

In the world Radiant Garden, Lea meets Ventus and befriends him quickly. Lea challenges Ventus to a friendly fight and loses. Lea leaves to sneak into the castle and bids him farewell and tells him to get their friendship memorized. Isa asks Lea why he instantly befriends people, which he explains that he wants everyone he knows to remember him, so he could live forever in the hearts of other people.

Between Birth by Sleep and Kingdom Hearts

Sometime after Ansem the Wise had taken Xehanort as his apprentice, he had plunged the entire world into darkness, turning everyone, including Lea, into a Heartless. As a Nobody, Lea found his way into Organization XIII and received his new name, Axel.

Sometime after Sora's journey to save the world from darkness, he possibly comes across Lea's Heartless and destroys it, leaving only Axel to be destroyed.

Lea sees a dream of Axel and Roxas eating sea salt ice cream. Roxas reminds Axel of his promise that he'd always be there to bring them back and even uses his catch phrase 'Got it memorized?' and disappears. Lea finally awakens from his slumber and sees in the mirror the tear like marks under his eyes Axel has are no more and he finally realizes he and the other Nobodies that resided in Radiant Garden are human again. He understands Xehanort doesn't count and wonders what became of Braig and Isa and begins his search for them. Aeleus and Ienzo doubt they would find them believing if they were completed they would have been already found. Lea decides to use another method on finding them by using the Door to Darkness and comments 'Why do I always get stuck with the icky jobs?'.

Sometime afterwards, Lea went to the Mysterious Tower to become a Keyblade Master. He used a Corridor of Darkness to get there. But about halfway there, Lea spotted Maleficent and Pete holding Queen Minnie hostage. Lea rescued Minnie by throwing one of his chakrams at the two. After Maleficent and Pete retreated, Lea exited the Corridor, wanting to help Sora and his friends, as well as wanting to see Yen Sid so he could be a Keyblade Master. King Mickey scolds him for using a corridor of Darkness saying how reckless he was to do so but nonetheless was suprised to have him be the one who saved them. While Sora and Riku were in the Dream Worlds, Lea was training with Yen Sid and the three Good Fairies.

Later on, Sora was captured by the real Organization XIII after being trapped in a deep sleep by Young Xehanort. Riku and Mickey tried to rescue him, but were restrained by Ansem, Seeker of Darkness and Xemnas. Luckily, Lea, along with Donald and Goofy, showed up to rescue his friends. During the rescue, one of the Organization members, wielding a familiar claymore, attacked Lea. His attacker's hood fell off, revealing that Saïx/Isa had sided with the Organization, much to Lea's dismay. Xehanort and his cohorts took their leave, allowing Lea and the others to escape.

When all of them returned to the Mysterious Tower, Riku decided that he should be the one to travel into Sora's heart to awaken him. Lea replied that he would help Riku should he fall into the darkness. After Riku was successful, Lea and the others were celebrating Riku for saving Sora. Shortly after Riku was appointed Keyblade Master, Lea claims that he'll catch up to Riku soon while revealing to them his intent to use a Keyblade. Trying to manifest it once more, Lea gets astonished when his Keyblade appears, which shocked everyone else as well.

It was later mentioned by Yen Sid that Lea is training to wield a Keyblade under Merlin and later in the ending of Kingdom Hearts: Birth by Sleep 0.2 -A Fragmentary Passage-, it is revealed that Kairi will be joining him in the training as well for the coming war. While Kairi isnt too pleased to hear this initally due to him kidnapping her as Axel, Riku and Mickey reassure her he has reformed and helped saved Sora.

In Kingdom Heats III, Lea continues his training with Kairi in the secret forest. a place in which time does not run giving Kairi and Lea as long as they need to continue training , he appears next to her while she is writing a letter to Sora whom she states that it its more her than it is for Sora. Lea then gives her a sea-salt Ice cream much Kairi's surprise, Lea states he has done this out of celebration for him and Kairi now that they have become Keyblade wielders, Kairi then notices Lea staring at her and asks him if he had forgotten something to which he admits, changing the subject Kairi expresses excitement for their duel into the ring telling Lea not to hold back but at that exact moment Lea remembers Xion, Overwhelmed by this he begins to get upset leading Kairi to comfort him, but he brushes it off as something, he begins to leave with Kairi telling him to stop apologizing for him kidnaping her previously while he was still in the Organization, he states he will under one condition, Kairi has to call Lea, Axel from now on to which she accepts.

Later on top of Twilight Tower, Lea is sitting alone with sea-salt ice cream which is one for Roxas and one for Xion upset about , Saïx appears but talks to him as if they were still friends with no intention of fighting him he takes a sea-salf ice cream from Lea much to his annoyance Saïx asks him why he bought three something which Lea refuses to respond and instead asks what Saïx is doing here to which the former states his signature catchphrase "got it memorized?" they have a conversation about joining the organization while they were somebodies the two of them befriended a girl known as Subject X who was held inside the castle of Radiant Garden following her disappearance they become apprentices for Ansem the Wise after he too vanished they became nobodies and members of Organization XIII. Saïx states the real reason from climbing up the ranks and following Xemnas was their only means of finding her however unfortunately for them they had no luck in finding her, Lea then attempts to persuade Saïx in leaving the Organization , Saïx states that Roxas is just like Subject X, whom is gone forever and that he needs to accept that but an enraged Lea states he will be bringing everyone back especially Roxas he even states he will be dragging Saïx home. Saïx then changes the subject to which Lea's upside-down tear markings are missing, which have stopped him from crying. Lea states he doesnt need them anymore. Lea and Saïx then part ways expected to fight each other at the Keyblade Graveyard for the fated final battle.

Lea joins the the other Guardians of Light to fight against Master Xehanort and his thirteen darknesses fighting thousands of Heartless and Nobodies along the way, eventually they encounter Terra-Xehanort. Terra-Xehanort then attempts to attack Kairi but Lea throws himself in between them protecting her ending up unconscious he and the others minus Sora are taken from a swarm of heartless and hearts are separated from their bodies. though Sora eventually manages to get his heart back and go back in time before their encounter with Terra Xehanort.

Lea and Kairi later fight against Saix and a hooded Xion, Sora soon comes to their aid and Saix uses his Beserk mode and overpowers Lea who steps in the way to prevent him from killing Sora and Kairi. Saix was about to kill his former friend but Xemnas appears still angry at Axel for betraying the organization prepares to kill him but Xion stops him claiming he needs him alive but Xemnas states he need his heart to forge the key and that he doesn't need his soul but having noticed the two were friends he gives the task of killing him to her, Lea then wonders who the hooded member is she prepares to strike hiim down but Sora intervenes calling Xion's name in Roxas' voice causing her to be overwhelmed with past memories. Enraged, Xemnas kicks Xion and Sora causing the former to reveal her face and Lea is overwhelmed by his memories of Xion, Xemnas prepares to kill Xion but Lea tries to stop him by grabbing his leg only or the Nobody to stomp on his foot.

Suddenly, a heart escapes from Sora and with a vessel provided by Vexen, Roxas returns telling Xemnas to lay his hands off his friends much to Lea's joy after explaining his return to Xemnas, the latter kidnaps Kairi and leaves forcing the three former Organization XIII members and Sora to fight Saix but Xion tells Lea to rest due to his injuries. after Roxas Xion and Sora defeat Saix, Lea runs over to him expressing his disgust on what the Organization reduced him to. Saix explains to Lea he joined in search of their missing friend he expresses his anger at Lea that he went on to make friends with Roxas and Xion leaving Isa and their friend in the dust he explains he lost all sense of purpose, Lea tries to reassure him he didn't forget about him, Saix admitted deep down he wasn't the type of person and that he was only jealous of him, having made amends with his former friend they call each other by their real names before the latter is recompleted as his former self. After this he tells Sora to go find Kairi as he Roxas and Xion have an emotional reunion.

Later he along with Roxas, Xion, Terra, Aqua, Ventus, Donald and Goofy regroup with Sora Riku and Mickey but were too late as Xehanort had killed Kairi and opened Kingdom Hearts moments earlier, As Sora prepares for his final battle with Xehanort, Lea and the other use their keyblades on Xehanort trapping him in Scala ad Caelum. after Xehanort's defeat at the hands of Sora, Donald and Goofy, he passes on with Master Eraqus in to Kingdom Hearts, Lea joins the others into closing it and are transported back into the Keyblade Graveyard.

In the games epilogue, Lea, Roxas and Xion are on top of Twilight Tower finally reunited they are joined by a restored Isa who hands out sea-salt ice cream to the trio. the foursome are joined by Hayner, Pence and Olette sitting altogether and staring into the sunset, the seven of them are picked up by Riku and are taken to Destiny Islands for a celebration with the other guardians of light. Sora manages to bring back Kairi and Lea and the others bear witness to Sora and Kairi spending one last moment together before Sora fades away from misusing the power of waking. 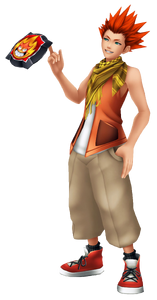 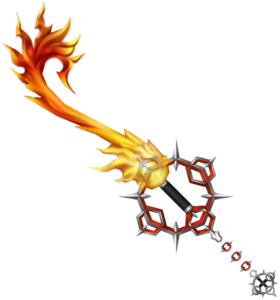 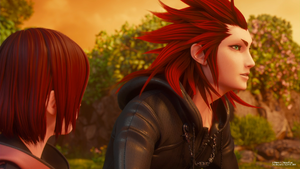