Autobot Scout
Leader of the Wreckers

Leadfoot is the new Autobot character in the 2011 Transformers film, Transformers: Dark of the Moon.

In Transformers: Dark of the Moon, Leadfoot is one of the Autobot Wrecker trio, as well as the leader of the Wreckers. All three Wreckers transform into NASCAR Sprint Cup Series Chevrolet Impala stock cars; Leadfoot's alternate mode uses the Target paint scheme of Juan Pablo Montya's #42 car.

Leadfoot applies his knowledge of science to create bigger and louder weapons for the Autobots and their allies. He carries rapid-fire chain guns. He is also said to be very good friends with the Autobots' weapon specialist Ironhide. In the film, Leadfoot speaks with a Cockney accent.

The cars playing the Wreckers, including Leadfoot appeared in the 2011 Daytona 500.

Leadfoot, Roadbuster and Topspin are an Autobot engineers called the Wreckers, who came to Earth in their ship: the Xantium, which carried other Autobots, including Sideswipe. NASA took possession of their ship and Director Mearing mentioned they were rarely let off base due to their behavior. When Sentinel expelled the Autobots, the Wreckers prepared the Xantium for launch, but Starscream destroyed their ship as it was leaving. In the battle of Chicago, Leadfoot and the other Wreckers killed the pilot of a Decepticons' fighter, and Leadfoot revealed to Sam that they had hid in a rocket booster which was detached from the shuttle before Starscream attacked. When Shockwave attacked their convoy and Optimus lost his trailer, they created a diversion so that Optimus could retrieve it. Later, they helped Optimus untangle himself and were among the surviving Autobots at the end of the film.

Cemetery Wind along with Lockdown hunted down Leadfoot and killed him before he got a chance to escape. He desperately pleaded "I'm an Autobot! I'm an Autobot!" and Hound was the first to lament and Crosshairs and Optimus Prime show sad faces for Leadfoot's death. He was later avenged by Optimus Prime as he killed both Lockdown and Harold Attinger. 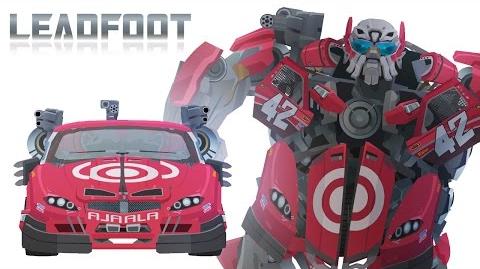