Leaf, also known as Green (Blue in Japan), is the female protagonist of the Generation I remakes, Pokémon Fire Red and Leaf Green, and a character in Pokémon: Let's Go, Pikachu! and Let's Go, Eevee!. Her rival in FireRed and LeafGreen is Blue. Her male counterpart is Red. Green from the manga Pokémon Adventures is based on her.

Leaf is a young girl with brown hair and brown eyes.

She wears a white hat with a red Poké Ball logo. Leaf wears a sleeveless, teal shirt, a pair of black sweatbands on her arms, a red skirt, long blue socks and athletic shoes, with a red stripe. Also, Leaf is seen with a yellow trainer bag, sometimes with the VS Seeker attached to it.

She wears a black and blue dress with matching blue shorts, and shoes of the same color. Her sweatbands are white colored.

In FireRed and LeafGreen, Leaf does not have any distinct personality, much like other player characters from the core series games.

In Let's Go Pikachu and Eevee, Leaf, unlike Red, is an enthusiastic girl and always wants to win, never content with defeat, but respects her opponents and tries to give the best of herself.

Leaf is a young girl from Pallet Town. The local Pokémon expert, Professor Oak, stops her from leaving town one day, saying that she needs a Pokémon for her protection. Upon doing this, Oak takes her to his lab and allows Leaf to choose one of three starter Pokémon, along with his grandson and her rival Blue.

After spending some time with her Pokémon, and returning to Pallet Town, Professor Oak gives both her and Blue a Pokédex so that they can fill it with information on Pokémon. This is the start of Leaf's Pokémon journey throughout the Kanto region.

She appears as a non-playable character in this game, under the name Green, like her manga counterpart. Her appearance is similar to the prototype female character that was supposed to appear in Pokémon Red and Green.

Leaf has a counterpart named Green (Blue in Japan), who is based on the prototype female character. During her childhood, she was kidnapped by Ho-Oh and met and became close with Silver, who was also kidnapped by Ho-Oh. After they escaped, Green and Silver separated from each other in Johto, and while Green traveled to Kanto, Silver remained in Johto. Green later stole a Squirtle from Prof. Oak's Lab, and nicknamed him "Blasty".

Green makes her debut in Wartortle Wars, when she stole Red's badges. She later got a Pokedex from Prof. Oak after he defeated her in the Indigo Plateau. She later appeared in the Yellow arc and in the Crystal arc.

Since the FireRed & LeafGreen arc, she has a new outfit, which is Leaf's outfit in the games. Green also appeared with her new outfit in the Emerald arc and in the Omega Ruby & Alpha Sapphire arc alongside Red. 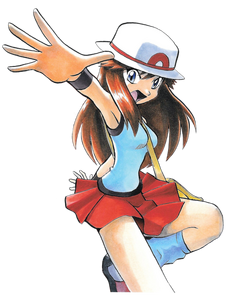 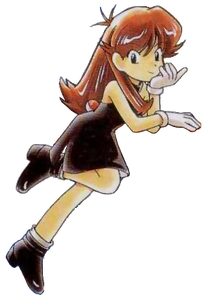 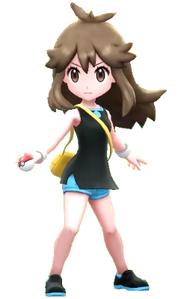 Retrieved from "https://hero.fandom.com/wiki/Leaf_(Pok%C3%A9mon)?oldid=1688248"
Community content is available under CC-BY-SA unless otherwise noted.