All Creatures Big and Small

Return to the Ark (successful)

Leah is a Grymph and the deuteragonist of the 2015 film All Creatures Big and Small (Originally titled Oops! Noah is Gone... and titled Two by Two in the UK).

She is voiced by Ava Connolly.

Leah is a Grymp, a wolf-like creature that is strong and powerful. During her and her mother Hazel's experience to gain access to the Ark, she and Finny the Nestrian are accidentally left behind to experience the flood up close. Now, she and Finny have to team up to both get on the ark. She acts very serious and takes things too seriously. She doesn't trust Finny and Obesey until they save her from falling to her death.

Leah is almost completely identical to her mother, despite changes to their size, body posture, and eye color. She is dark grey colored with brown stripes around her body and a vanilla covered underbelly. She has a black nose snout, green eyes, and her ears have a dark orange inside. 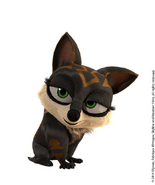 Add a photo to this gallery
Retrieved from "https://hero.fandom.com/wiki/Leah_(All_Creatures_Big_and_Small)?oldid=1864163"
Community content is available under CC-BY-SA unless otherwise noted.