Being alone
Listening to music to calm

Leatherhead is a character of Teenage Mutant Ninja Turtles (2012). He is an ally to the turtles in this incarnation, and has also become Slash's second-in-command in the Mighty Mutanimals.

He was voiced by Peter Lurie, who also voiced Hashirama Senju in Naruto.

Leatherhead was a baby alligator that was owned by a kind boy until the boy's cruel parents found him and flushed him down their toilet into the sewer. He was discovered there by the Kraang, taken to their dimension, mutated, and experimented on. After suffering long and brutal torture, Leatherhead escaped back through the portal that connected Earth to Dimension X with a piece of the Kraang power cell. Leatherhead took up residence in the sewers, contending with his violent temper and protecting the power cell at all costs. He soon comes across the Turtles, befriending Michelangelo, but after fighting several times alongside his new friends against the Kraang, sacrifices himself to defeat the Kraang and is sent to Dimension X. During his absence, an illusion of Leatherhead is conjured by Sir Malachi during "Mazes and Mutants", played up as the typical fairy-tale dragon for the Turtles to defeat.

Though only a year passes on Earth, several decades pass in Dimension X, and Leatherhead returns in "Into Dimension X" considerably grayer, leaner, and older. The Turtles enter Dimension X and are elated to reunite with their old friend. Together, they stymie the forthcoming Kraang invasion of New York, and though Leatherhead once again tries to sacrifice himself to save the Turtles, Mikey is able to bring him back home to Earth. Though the Kraang's invasion has been halted for many years in Dimension X, they nevertheless invade Earth within the next few days. Leatherhead personally came to Splinter's aid against the Shredder, violently thrashing him around in his powerful jaws. However, the Shredder hit Leatherhead's pressure points to subdue Leatherhead's superior might, and pummeled him into the sewers.

Half a season later, Leatherhead returns as the second-in-command of the Mighty Mutanimals, a ragtag group of mutants formed by Slash that have been fighting the Kraang invasion since the taking of New York. Leatherhead is overjoyed to be reunited with his friends, especially Michelangelo, and takes part in the battle to evict the Kraang from New York. In "Clash of the Mutanimals", Leatherhead and Pigeon Pete work to free their brainwashed comrades Raphael, Slash, and Rockwell when the Shredder uses them as test subjects for a mind control serum. Leatherhead got a second chance to fight Shredder, but the combined might of the four Turtles and four Mutanimals was only enough to fight Shredder to a draw. In the third-season finale "Annihilation: Earth", Leatherhead nearly attacks Bishop, a defected Kraang, and does not come to trust him until after they work together to take down the Technodrome. Leatherhead takes part in the battle against the Triceraton Empire, but the heroes are unable to save the planet, and Leatherhead is last seen trying to take Rockwell's hand as they are all sucked into a black hole to their deaths. Leatherhead's death is undone thanks to the efforts of the Turtles and Professor Zayton Honeycutt, who go back in time and ultimately prevent the Earth's destruction and Leatherhead's death.

When the Shredder mutated into the Super Shredder, Leatherhead put up a ferocious fight against him once again, and later took part in the clash against the returned Foot Clan. Leatherhead personally killed Rahzar by grabbing him in his jaws and dragging him to the bottom of a river, drowning him. When Splinter fell in battle against Shredder, Leatherhead and the other Mutanimals attended his funeral in the fourth season finale "Owari". Leatherhead and Karai were later summoned by Mikey to help battle Kavaxas' apocalypse in "End Times", and Leatherhead had the opportunity to bid farewell to the deceased Splinter's spirit once Kavaxas had been defeated.

In The Big Blowout, Leatherhead and the other Mutanimals teams up with the Turtles, April, Casey, Karai and Shinigami to defeat Bebop and Rocksteady, who are recruited by Krang and 1987 Shredder until the Rhino and Warthog reformed after realizing their new boss was lunatics. Following the destruction of the Technodrome 1987, Leatherhead proceeds to knock out Shredder 1987 to make him stop his gibberish. 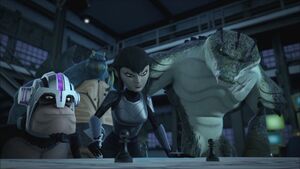 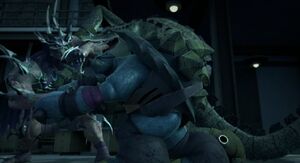 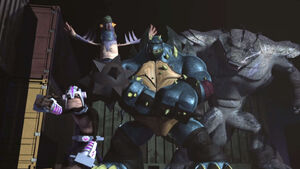 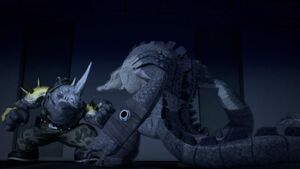