Doctor Who: The Face of Evil

Anti-Heroine
Leela is a companion of the Fourth Doctor, and the deutagonist of season's 14 and 15. A member of the Sevateem tribe, the descendants of Earth colonists, she met the Doctor, and after dealing with Xoanon, Leela forcibly joined the Doctor. During their adventures together, Leela would be educated by the Doctor, who attempted to instruct her on the nature of societies beyond her own. While she learned to be more pacifistic, she never lost her primitive edge. During their travels, she met Litefoot and Jago, and be joined by K9.

After her adventures, Leela would feature in Big Finish's audio plays, both in stories set during her travels, and those after, including a role as a main protagonist of spin off series Gallifrey.

In The Face of Evil, Leela argued against the tribe's shaman, Neeva, in attacking the rival Tesh tribe, which he claimed came from the Sevateem's god, Xoanon. Her blasphemy against Xoanon secured her banishment. Her father, Sole, undertook the ritual Test of the Horda on her behalf and was killed. While attempting to escape, Leela fought two men, sent by Neeva to kill her. She used a crossbow to slay one of her assailants while Tomas, her friend, killed the other. Leela instructed him to return to the tribe and would meet the Fourth Doctor. She initially believed him to be the Evil One, due to the resemblance between him and the carved face on a cliff nearby.

The Doctor saved Leela from the psychic projections of Xoanon that resided in the jungle, earning her trust. After the Doctor was captured, she returned to the Sevateem village and helped him escape. Her use of janis thorns to paralyse and kill was criticised by the Doctor.

Calib used a janis thorn against Leela, and only through the Doctor's use of a bioanalyser was she restored from paralysis and saved from death. Leela then went with the Doctor to the base of the Tesh - in fact the spacecraft used by the expedition. There, the Doctor found the supercomputer Xoanon and set about trying to cure him of his insanity while Leela fended off the attacking Tesh, killing several. The Doctor was able to unify the mind of Xoanon, slipping into unconsciousness as he did so.

Leela cared for him for two days until he came to his senses. She followed him back to his TARDIS and requested that he take her with him. The Doctor protested, admitting that he liked Leela, but saying he could not take everyone he liked with him. She forced herself into the TARDIS, and the ship took off. 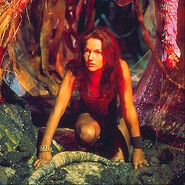 Retrieved from "https://hero.fandom.com/wiki/Leela?oldid=1913951"
Community content is available under CC-BY-SA unless otherwise noted.