Free the geth from control of the Reapers (succeeded)

Legion is a major character in the original Mass Effect video game trilogy. Legion is a Geth collective intelligence comprising of 1,183 formerly separate Geth intelligences. An advanced module, his platform is capable of speech and is made to interact with organic beings as well as to be proficient in the use of more weapons than production model Geth.

He was voiced by D.C. Douglas, who also voices Suguru Kamoshida and was the voice of recurring resident evil antagonist albert wesker.

Despite being a single platform, Legion is fully capable of speaking; according to Tali, a single geth is usually no more intelligent than a varren. This is due to the fact that he is the combination of 1'183 geth intelligences, thereby giving him the intelligence of 1'183 normal geth. As such, he does not consider himself an individual and refers to himself using plural pronouns. While this gives him the ability to work independently, it can also occasionally be to his detriment. An example of this is during his loyalty mission, when the group have the option to rewrite the geth who worship the Reapers instead of simply destroying them; 573 of Legion's intelligences favour rewrite while 571 favour destruction, forcing Shepard to make the decision despite them being his people. He also initially doesn't have a name, though when EDI suggests the name "Legion", he accepts it, describing it as an "appropriate metaphor".

Legion speaks in a straightforward and laconic fashion, often answering with single words. When he does use whole sentences, the word structure is very organised. He is very blunt about everything, being quick to point out the flaws in EDI's robot body and calling her out for asking questions to which she already knows the answers, causing EDI to complain about him having no sense of humour. This honesty extends even to matters regarding his own kind; when Paragon-Shepard wonders how the geth got to the point of allying with the Reapers instead of negotiating with the quarians, claiming they're better than that, Legion simply replies that they are not, and empirical evidence proves as much.

Legion is arguably the most alien of Shepard's allies, having a very odd set of morals. He doesn't consider the geth who worship the Reapers to be true geth, referring to them as "heretics", and refers to the Reapers as the "Old Machines," describing their typical title as "superstitious". During his loyalty mission, he states that every being has a right to make their own decisions despite putting forward brainwashing the heretic geth as an option; when Tali points out the contradiction in this statement, Legion states that the option of brainwashing merely exists, and he does not endorse it. However, Legion is fully aware of how his morality might come off to others, a trait he shares with Samara, stating that all species must be judged by their own merit and that treating a different species like one's own is no different from racism.

Legion is shown to have greatly admired Shepard even before meeting him/her; when asked where he got the N7 armour piece that he used to repair himself, Legion confirms that it was part of Shepard's old armour. If questioned about specifically using Shepard's N7 armour to repair himself, Legion becomes evasive, first rationalising that "there was a hole" and then stating "no data available" after being pressed. This suggests that the use of Shepard's armour was an irrational decision, which goes against the concept that every action the geth take is the result of calculation, unaffected by emotion. Besides Shepard, Legion also expresses admiration for EDI, because unlike the geth, who are made up of different processes that rely on each other, EDI handles all the functions on the Normandy by herself, though Legion also questions how she manages to maintain stability. Legion also occasionally expresses his disapproval of how EDI's activities and development are shackled aboard the Normandy. 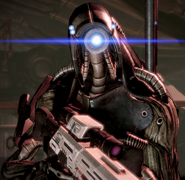 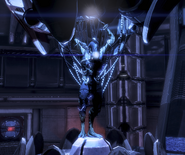 Legion captured
Add a photo to this gallery
Retrieved from "https://hero.fandom.com/wiki/Legion?oldid=2321664"
Community content is available under CC-BY-SA unless otherwise noted.