A girl who grew up in a wealthy family, Lei Fang is a woman of justice and bares a very independent spirit. Throughout the series, she seeks to fight Jann Lee, who is thought to have saved her life at one stage in her past, to prove herself to him that she too is a strong individual. However, Leifang has lost to Jann Lee in almost every tournament, except the 4th one, where she finally defeated him.

She is voiced by Cassandra Lee Morris in English Dub.

Leifang was born into an affluent family in China. Six years before the first tournament, Leifang was saved from a group of thugs by a martial artist, Jann Lee. Although she was very grateful for being saved, she felt that she could have handled the situation herself. After that incident, she mastered the art of taiji quan and sought to prove her strength to Jann Lee.

Leifang joined the first Dead or Alive Tournament in order to fight Jann Lee, to prove her worth to him. During the tournament she faces him. However, she is defeated by him. This doesn't dampen her spirits, however, and she goes on to train herself for the next tournament.

During her matches of the second tournament, she meets a woman of higher wealth and status, Helena Douglas. She gives her a look of curiosity, but hidden with envy as she continues ascending in the glass elevator. She both envies and admires Helena.

She forms a philosophical rivalry with Tina Armstrong, who believes that the meaning of power comes from physical strength. Tina lifts a boulder and shouts "This is power, Leifang!" and throws it right at her feet. Leifang disagreed, and simply demonstrated that power originated from the mind, and was channeled into and through the rest of the body. With that same boulder at her feet, Leifang leans over it saying, "You don't know anything about power." and demolishes the rock with a single palm. Tina herself was astonished by Leifang's inner strength and lets off a whistle.

When she finally faced Jann Lee, she tells him while demonstrating taiji quan that her martial art was perfected and that she was ready for their battle to "live in his world". However, Leifang loses again, resulting in Jann Lee retorting, "This isn't the place for you" thinking she is not ready.

Now known to many as a young genius of taiji quan, Leifang continues to train to defeat Jann Lee. She enters the third Dead or Alive tournament, telling herself; "This time... This time, I am going to beat him!" She once again fights her way to Jann Lee. Leifang manages to get to Jann Lee at Freedom Survivor but her fight request is denied in a brutal manner and she ends up encountering Hitomi, whom she is rival with at first impression. When she finally reaches him, telling him it was time for her to defeat “the dragon” within him, despite her best efforts, Leifang once again loses the fight.

After the tournament is over, she returns home. While out in the city, she rescues a young boy from getting kidnapped, easily defeating the kidnappers with her martial art skills, reflecting the time when she was saved by Jann Lee.

Leifang enters the tournament to once again fight Jann Lee. She is defeated by Hitomi in a match over a simple cabbage, but they befriend each other sometime afterwards. She later fights Bass Armstrong after he blindly began attacking bystanders over losing his money at the casino. After these matches, she finally reaches Jann Lee, who is not really surprised to see her. The two combat in the DOATEC Tritower, which begins to fall apart due to the attack by the Mugen Tenshin Ninja Clan. However, the two start their match anyway. Leifang finally accomplished her goal and defeated Jann Lee.

Leifang makes an appearance in Jann Lee's story mode, finding Alpha-152. She gets ready to fight the clone, but it bursts out of its tube and attacks her, not giving her a chance to get up and fight. As the Alpha-152 throws her, Jann Lee mysteriously appears and catches her. She tries to get up to fight, but Jann Lee doesn't allow her to.

Upon hearing about the fifth Dead or Alive Tournament, Leifang reunites with Hitomi and the two of them set off a journey to train together. While training at a circus that's still under construction, the pair does a friendly sparring match against Brad Wong and Eliot. They are then invited to the tournament by Zack

Later on, Leifang and Hitomi travel to South America to continue their training. There, they spot Jann Lee being recruited by Zack into joining the tournament. Knowing that she has to prepare herself to fight him again, Leifang does a sparring match against Hitomi to improve her skills. After the fight, the two of them go their own ways, promising each other to meet again at the tournament.

Leifang travels to New York, following Jann Lee to a martial art gym. While trying to spy on him, she bumps into Mila and decides to spar with her to train more. Leifang manages to find Jann Lee on a train and follows him. Suddenly, the train becomes unsteady and Leifang stumbles. As she tries to rebalance herself, an old man begins to fall towards her. However, Jann Lee quickly steps in between, protecting Leifang from an embarrassing moment. After he tells her that it's not right to sneak on people, the two of then engage in a fight. However, before they could, the train somehow loses its balance and its thrown off its track as Leifang ends up on top of Jann Lee, resulting in the two staring at eachother.

At the tournament, Leifang was still distracted about the incident between the two with Jann Lee telling her to drop it and just focus on the fight. Leifang is defeated by Jann Lee in the quarterfinals, marking her fourth loss against him. 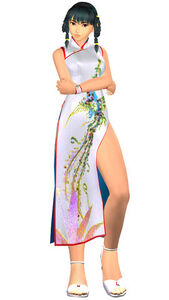 Leifang in Dead Or Alive 2 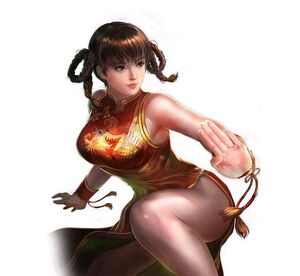 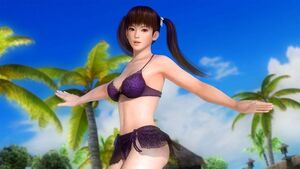 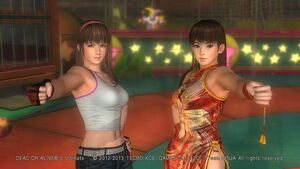 Leifang with her best friend Hitomi 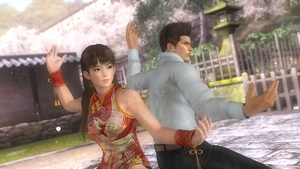 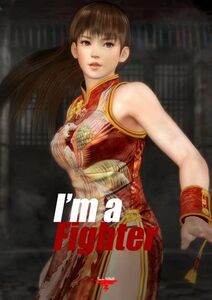