Bathing in the forest, Training, Fighting

Martial Artist, Cop
Lei Wulong (Chinese: 雷武龍) is a character, as well as an hero in the Tekken series who was introduced in Tekken 2 and has returned for all subsequent games. Lei is very laid back with a casual attitude. He is one of the comedy relief of the Tekken cast and is constantly cracking jokes. Although comedic, Lei is very dedicated to what operations are at hand.

A man who lives for his job. Dedicated to the point of obsession, Lei is a law abiding and gifted cop. He is fair minded and affable to those around him (unless they break the law). In his Tekken 5 interludes, he is shown treating his friends (such as Wang Jinrei and Steve Fox) with compassion and respect. For his enemies however, he attains a stern and direct approach to their arrest. Although his attempts can sometimes be clumsy, Lei's intentions are always virtuous in nature.

During his time as one of the most respected Hong Kong police detectives, officer Lei Wulong has developed his own style of Kung Fu, and uses this to his advantage when facing the many criminals he encounters within his home metropolis. A number of killings lead to the investigation of Kazuya Mishima, who was linked with several Triad and Mafia transactions across the globe. But he lost his memories from an airplane crash and started working for Kazuya. Lei vowed to track down the center of Kazuya's operations and retrieve Bruce. To further his inquiry, he enters the second Rave War!

Lei is practicing his shooting. He runs out of bullets, smiles and reloads. Lei then fires more shots. There is a close up on the target, with bullet holes saying "The End".

Bruce Irvin almost pushed Lei to the brink of defeat in Tekken 2, but Lei managed to come away victorious. Bruce's flight home was then reported crashed, killing all passengers aboard. It was rumored that Kazuya's corps were involved as a means of silencing Bruce. Lei's investigation and intuition led him to believe the accident was staged, and he doubts that Bruce is really dead. After the last tournament, Lei returned to his job as an investigator of international crime.

Though 19 years have passed, nobody believes he is 45. Known as Supercop, he's feared internationally by even the most powerful of crime organizations. Falling within his jurisdiction are the strange disappearances of prominent martial artists. During these investigations, Lei was visited by the head man of the MFE, Heihachi Mishima. He asked Lei to join the "King of Iron Fist Tournament 3". Why Heihachi would seek him out for a mere tournament was beyond Lei. A believer in fate, Lei feels there's a reason for this meeting.

Lei's life was consumed as usual by police work. Unfortunately for Lei, his live-in girlfriend got fed up with Lei's workaholic lifestyle and dumped him in favor of Lei's assistant. Ironically, the assistant acted as a liaison for Lei whenever she wanted to get in touch with him at work. When Lei found out about this, he became extremely depressed.

Around the same time, Lei botched an operation to bring a crime syndicate to justice. Lei failed to capture an agent of the syndicate, who would have enabled the police to take down the syndicate's boss. The failure cost the police force two years worth of intense undercover investigations. Rival detectives who were jealous of Lei's stellar case record saw this as an opportunity to damage Lei's career. Unbeknown to Lei, the rivals reported to Lei's superiors that he botched the operation by "allowing personal affairs to affect his job performance". As a result of this betrayal, Lei wound up on a one-month suspension from active duty.

After winning the Tournament, Lei headed to the Mishima Zaibatsu data-center to dig up information on the Syndicate's hired assassin. Lei is in the Mishima Zaibatsu Computer Room looking at information on the hired assassin (Nina Williams), where he finds that she is currently in Hotel Leanne. About a day or so later, Lei is at the hotel ready to stop Nina from carrying out the Syndicate's plans. He busts open the door yelling, "Freeze!". Nina fires a couple of shots which are dodged by Lei. Lei goes back into the room and sees that Nina has escaped. Thinking fast, Lei slides down a drainage pipe and runs across the street. When he reaches, he notices that Nina and Steve are staring at each other. Lei then yells "Freeze" again and Steve helps Nina escape, tackling Lei. Lei fires two shots and one hits Nina in the leg. Steve punches Lei, knocking him out. The picture of a knocked out Lei is shown next to head lines proclaiming Lei's new found glory. Lei smiles at the camera and the scene ends.

Interpol detective from Hong Kong, AKA "Super Police." Lei was investigating serial rampage incidents at dojos around China when the culprit disappeared. After a similar incident in Japan, Lei was certain the next target would be the King of Iron Fist Tournament 5 and decided to enter the competition himself.

Lei once again made headlines after arresting several members of the Syndicate at the close of the King of Iron Fist Tournament 4. Lei soon became interested in a string of attacks on martial arts training halls throughout China and started an investigation into the matter. Among the victims were several renowned Kung Fu masters that Lei knew personally. Lei poured all of his effort into the investigation but the attacks stopped abruptly and the trail went cold. One day, Lei received a report that several similar attacks had occurred on dojos in Japan. It was then that Lei began to suspect the events were linked and that the perpetrator would surely be at the King of Iron Fist Tournament 5.

Before Lei is able to enjoy his victory at the tournament, he returns to Hong Kong for a new investigation. Lei is fighting a criminal on top of a moving bus. He successfully overcomes the criminal and handcuffs him. He reports back to his superior that he has the suspect in custody, but before he can finish talking, Lei is hit from behind by an oncoming sign, knocking him off of the bus. Lei groans and says: "That's gonna leave a mark".

In pursuit of Feng Wei for his criminal offenses, the military sends Lei to Japan. As the trail for Feng Wei is unsuccessful, Lei is helpless, and he returns to Hong Kong. With China in utter chaos and riots happening frequently, Lei grew impatient. Lei knew the true reason for the riots were cause of the Mishima Zaibatsu. In an attempt to arrest Jin Kazama, Lei enters The King of Iron Fist Tournament 6.

At a Chinese market street, Lei Wulong was just ordering for noodles. But the meal was soon interrupted when an thief was seen fleeing through the scene with a bag. Instinctively, Lei kicks out the stool, of which he was sitting on, tripping the would-be thief. Again, the thief flees and Lei kicks the stool a second time, saying "The bag...Hand it over!". The stool hits the thief on his back, boomeranging him, causing him to fall and immediate arrest. After Lei reports that he "has a purse-snatcher in custody" (whilst still holding his plate of noodles), he tries to sit down and eat (unaware of what he did with the stool), only to fall...with the plate and noodles within to fall on top of his face (since the last thing that could be heard was Lei yelling in pain).

Though wasn't mentioned in his background story that the detail shows him only attempt to arrest Jin, Lei didn't forget his other, but also his old target, Kazuya, who now leads G Corporation. Due to his history in attempt to arrest Kazuya when he was Zaibatsu leader during Tekken 2 event, Lei despise his, knowing that he still carry his evil reputation agenda of attaining a power to reclaim Zaibatsu's throne in a shadow by announcing himself a "hero of all world who going to stop". It was soon turned out to be true as Lei expected that Kazuya still trying to continue his evil agenda in a shadow when Kazuya also not forgetten Lei also as one of his potential threats for getting in his way to reclaim Zaibatsu's leadership, by sending his G Corp army to kill Lei, until a temporarly retired rebel leader, Lars, and a female cyborg Alisa arrived to assist him. Afterward, Lei entrust Lars and Alisa to take care of the remaining G Corp army while Lei got other duties calls from officials and secure one of his Interpol troops safely. 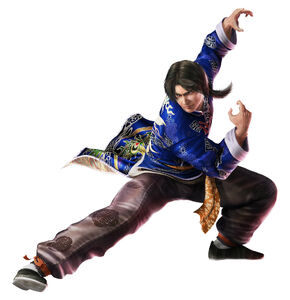 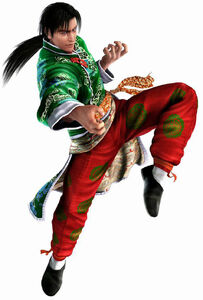 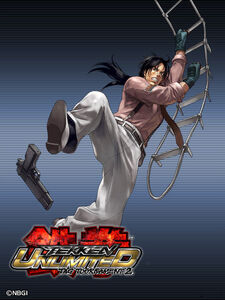 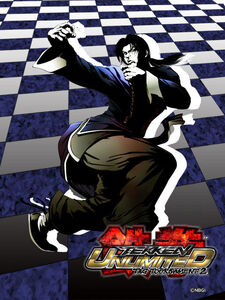 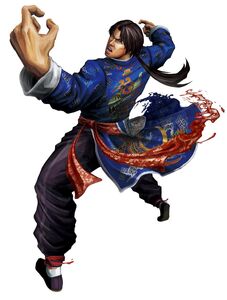 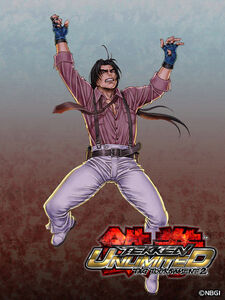 Retrieved from "https://hero.fandom.com/wiki/Lei_Wulong?oldid=1755644"
Community content is available under CC-BY-SA unless otherwise noted.