Leina (originally incorrectly romanized as Reina) Vance is the middle daughter of the Vance family and the heir to the Count's throne. She runs away from home to follow in her mother's footsteps of a warrior and make her own way in the world in hopes of becoming a stronger warrior by entering the Queen's Blade Tournament. Leina is the main protagonist of the Queen's Blade anime as well as the mascot character of the Queen's Blade franchise.

Leina is a young busty female adult with long blonde hair tied up in two braids with rings at the end and blue eyes. She is almost exclusively adorned in armor with a distinct breastplate that gives her protection and immunity to certain demonic attacks. On her right arms and neck is a series of long brown straps wrapped around her that dangle about freely. For added protection, she carries a full-arm armored gauntlet on her left arm with a buckler mounted on it.

Leina is a headstrong woman, who likes to do as she wants, but is also easily lead to admire others, as seen with her first encounter with Risty. She is very determined to fight, and eager to branch out and fight different opponents, so that she may become stronger to become Queen.

Leina is no doubt a skilled warrior and most definitely a resourceful one. With sword and shield at hand, Leina is the all-around combatant in the Queen's Blade gauntlet. Her breastplate carries magical defensive properties that prevent her from being exposed should she sustain damage in the heat of battle, its durability so great that it can even resist Melona's breast milk. When she has gained the upper hand in a battle, she utilizes her signature move (Dragon Tail) to finish of her opponents in a flash. She is adept at  copying the techniques of her allies and opponents by experiencing them or observing them first hand.

When the sword she inherited from her mother broke and was reforged with Iron Mountain ore, it became known as Evindil, the "Wind of Destiny" (in the anime, Ymir said this was dwarvish). It was thanks to this sword that Leina managed to exorcise Delmore off Aldra, and take away most of her powers. 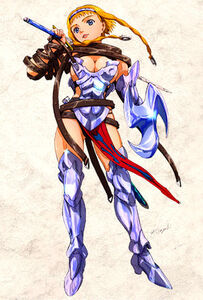