Hanging out with Xiba and Natsu

Martial Artist
Leixia is a new character in the recent installment, Soul Calibur V. She is the daughter of Chai Xianghua . If she has the soul of Algol, she'd be called "The Great Hero Princess".

Leixia is a cute teenage girl. Her facial features resemble her mother, Xianghua, and her hairstyle is based on a traditional Chinese hairstyle worn by young women. She is wearing an elegant outfit inspired by the blue lotus flower which shares the aesthetic of Xianghua's costumes from the previous games. She has Kilik's pendant, the Dvapara-Yuga fragment, attached to her collar.

Leixia, like her mother, is very bubbly and optimistic. She is very bright but quite naïve; according to Maxi, she tends to trust people too easily, which can get them into tense situations. This is probably due to her young age and hasn't quite matured just yet...

Based on her back story, it is clear that she was a tad spoiled growing up, and this trait caught on as she got older.

After Xianghua left Kilik and was forced to marry a Ming General, she gave birth to Leixia. Xianghua, being well experienced in life during wartime and martial arts, often told her daughter war stories. These tales sank in while Leixia was young, giving her a deep love for her mother, heroism, and swordsmanship. In fact, these stories were in an idealized vision in Leixia's mind, and she pestered her mother to teach her swordsmanship.

Leixia, being the eldest daughter of a respected general and an upperclass woman, could have had a quiet and comfortable life. She's well educated, loves reading, writes poetry, and plays the koto with some skill. Leixia believes in heroes and perhaps, deep down, she would like to become one herself.

Xianghua, knowing of the dangers of the world, sought to protect her daughter from the very lifestyle she idolized. Leixia, ever tenacious, runs away from home, bent on creating her own future. 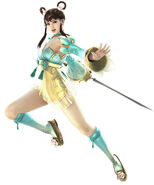 Retrieved from "https://hero.fandom.com/wiki/Leixia?oldid=1649211"
Community content is available under CC-BY-SA unless otherwise noted.