Lem Lemoncloak is a character from A Song of Ice and Fire novels and it's HBO TV series adaptation, Game of Thrones, and a member of the Brotherhood without Banners, an outlaw organisation founded by Beric Dondarrion to bring justice to the Riverlands after it is attacked by the Lannisters. It becomes a center for war after Robb Stark arrives in the Riverlands, and after his father Eddard Stark's death at the order of the Lannisters' King Joffrey Baratheon, being proclaimed King in the North. Lem is short for Lemoncloak, after the large yellow hooded cloak Lem wears, he is commonly known as Lem Lemoncloak.

In the TV series he is portrayed by Jóhannes Haukur Jóhannesson.

Lem is among the outlaws who encounter Robb's younger daughter Arya Stark, Gendry and Hot Pie digging in a garden. When Arya tries to escape she smashes a tankard into Lem's face, breaking his nose, before discovering he is an ally of Harwin, a former guardsman for the Starks. Lem accompanies Arya to meet Beric in the Hollow Hill, the Brotherhood's base.

Later the Brotherhood encounter a group of the Brave Companions, a vile sellsword company also known as the Bloody Mummers, at a burning Septry and fights them. Lem rides down the Companion who killed Kyle, another member of the Brotherhood.

The Ghost of High Heart keeps asking Lem to kiss her. He is skeptical of her, the Ghost apparently has prophetic dreams. Lem is also skeptical of Beric's resurrections by the Red Priest Thoros of Myr, claiming Thoros is just a good healer, as does Harwin. However Lem, like other members of the Brotherhood, is a follower of the Lord of Light, R'hllor.

In what becomes known as the Red Wedding, Robb Stark, his mother Catelyn Stark, and most of their army are massacred and Catelyn's brother Edmure Tully captured by their treacherous vassals, the Freys and Boltons, who have secretly joined the Lannisters. Catelyn is stripped and thrown in the river after a day and a night. Arya, while warging into her direwolf Nymeria, finds her mother and drags her out of the water. She is found by the Brotherhood and Harwin, the former Master of Horse at Winterfell, begs Thoros to bring her back. However Thoros claims she has been dead too long. Beric then performs the last kiss on her, and Catelyn rises, while Beric dies a seventh and final time. Leadership of the Brotherhood is taken by Catelyn, who becomes known as Lady Stoneheart. Stoneheart's mission, to take vengeance on all those she believes connected to the Lannisters, leads the outlaw band to fracture. Lem remains and is among the outlaws who hang Petyr Frey. When Merrett Frey comes with the ransom they decide to hang him for his role in the Red Wedding. He tells them they have no witness, but Lem tells him he's wrong and reveals Stoneheart. He asks her if Merrett was part of it, and when she nods Merrett is hanged.

Lem is told to hide near the Crossroads Inn. The Brotherhood search for the Mad Dog of Saltpans, who led a savage attack on the town of Saltpans. It is widely believed to be Sandor Clegane, "the Hound", as the outlaw was wearing his distinctive hound-head helm. However it is really Rorge, a paedophile rapist who is leading a group of Bloody Mummers. Lem leaves when he hears the Mad Dog is moving north along the Green Fork. However they evade him by doubling back round the river.

Brienne of Tarth, her squire Podrick Payne, and Ser Hyle Hunt arrives in the Riverlands, searching for Sansa Stark and Arya Stark. They encounter the band of Brave Companions that evaded Lem. Brienne fights them to protect the war orphans at the Inn, killing Rorge, but is wounded by Biter, however she is saved by Gendry.

Brienne is captured by the Brotherhood and taken to the Hollow Hill. Lem takes the Hound's helm, wearing it himself. Thoros criticizes him for robbing a corpse and wearing the helm, telling him Sandor was a man in torment and Rorge a beast in human skin. Lem says it will make his foes afraid. Brienne, Podrick and Hyle are brought before Lady Stoneheart. On finding that Brienne is apparently with the Lannister regime and thinking she betrayed her, Stoneheart tells her to kill Ser Jaime Lannister or be hanged. When Brienne refuses to make that choice, Stoneheart orders the Brotherhood to hang her and her companions. Lem takes her outside with Jack-Be-Lucky to hang her. When Brienne asks him to return her bones to her father he tells her he wants his wife and daughter back. However as they begin hanging her Brienne shouts a word. The Brotherhood release her and later she meets Jaime and tells him to come with her. 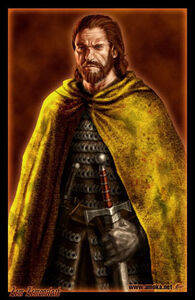 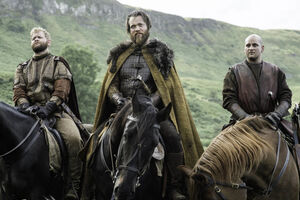