Protect the environment.
Liberate Earth from evil invaders.
Defeat the Lord of the Deep.

The Lemurians are an advanced human race in Palladium's Rifts Megaverse which fights the evil plaguing mankind in a post-apocalyptic Earth.

When the Atlantean cataclysm occurred, killing most of the Atlanteans, scattering the remnants across the Megaverse, and causing the disappearance of Atlantis itself, the Lemurians too suffered but in a different way. Magic began to disappear and the dimensional rifts had closed, trapping beings and creatures not of this world on Earth and endangering Lemurian civilization which was reliant on magic. Having stored mystical energy in its floating cities, they soon came under attack by desperate aliens, demons, and others who needed the energy to create dimensional rifts to go back home. A decision was made to leave the world for another dimension that had magic.

The Lemurians discovered an open rift (which had been opened by the demonic Eldritch monster, the Lord of the Deep who had arrived on Earth to consume the world) and raced through it at the cost of three of their cities which were destroyed or captured by the Lord of the Deep. They ended up in an oceanic pocket dimension that belonged to the Lord of the Deep and stayed there for 150 years (while on Earth, 15,000 years had passed since 12,000 BC). Upon the return of magic to Earth, the Rift re-opened and dumped it's contents (sea and the cities) into Earth. Now the Lemurians fight to protect all life on Earth from the demonic evil forces plaguing the world.

Lemurians are humans of Southeast Asian descent whom re-engineered their DNA. It has made them a graceful attractive people with a slight build, muscular bodies, and delicate features. Look human except for the pointed elf-like ears and the lack of body hair (except for the hair on their heads and the eyebrows). They have gills near the ears and skin colors that range from grayish brown to gold with flecks of green or blue on the shoulders, along the sides of the neck, and the tops of their forearms. When it comes to the hair at the top of the heads, they display a far greater variety in color than humans.

Lemurians all have psionic abilities, enhanced senses, the ability to breathe on both land and underwater, enhanced healing, and the ability to swim up to a mile deep. The average life span for a Lemurian is 300 years and upon reaching adulthood the aging slows dramatically, resulting that a Lemurian still looks as if he or she was in their 20s or 30s after passing 100 years. They also have a connection to nature which includes sensing life and having a natural affinity with the animals of the world.

Lemurian civilization is a society of literate and well-educated people, whom are knowledgeable in ethics and mathematics. They are an open-minded nation who are always on the lookout for new knowledge or ways of achieving harmony with the world. All life forms have value to them, and they care and protect the oceans, nature, and all life on Earth. They have 1-2 dozen floating cities and several outposts scattered throughout the world.

The Lemurians have mastered the powers of life. They cultivate in the seas various types of seaweed, algae, coral, kelp, etc. Fruit and nuts are grown on islands and in the floating cities. For meat, they harvest fish, plankton,, and other sea creatures.

Lemurians belong to one of several castes;

Lemurian cities are wonders of the world, being able to submerge in the depths of the sea or soar high into the sky. These cities are always mobile, rarely staying at the same location for longer than a few days, usually either traveling for days to months or simply drifting. When on the surface of the seas or underwater, they are travel at speeds more than x2 that of the USN Arleigh Burke-class destroyer of the late 20th century USN destroyer, going at 70 mph. The cities also have the ability to fly, at speeds nearly 50% faster than that of an AH-64 Apache helicopter and at an altitude of several km.

Full of ziggurats and stone pyramids which are able to use and store magical energy. By using the ley lines of the planet, the cities are able to teleport from one nexus to another nexus on Earth, and while along a ley line are able to travel 50% faster and recharge and restore their energy reserves by tapping on the magical energy. While on a ley line they can control the currents of the sea and wind along that ley line, as well as the weather, control the water temperature, sense if there are any dimensional anomalies, and either close or open dimensional Rifts.

They are beautiful cities, full of manicured and sculpted gardens, courtyards, and parks. Teeming with plants and animals of all types. With private gardens on terraces and the sides of buildings, and small farms on the rooftops of most buildings. Filled with sculptures, paintings, architectural wonders, and mosaics. One gets the impression of a forest with a city built in the center, or of a city-nature preserve hybrid.

Populations vary in these cities but they can have 100s of thousands of residents, of which usually 90% are Lemurians and the rest aliens, mutates, and surface-dwelling humans. Usually a fifth to a third of the Lemurian population are practitioners of magic. Lemurian cities move around the world so they can study life forms, learn about life's mysteries, collect specimens, and find new ways to live in harmony with nature.

For combat, Lemurians wear bio-Armor. Living symbiotic suits created by magic, which provide the user protection comparable to that of a late 20th century tank or up to x5 the protection. Made from elements from the natural world (coral, kelp, chitin, shark, wood, feathers, etc).

In the same manner, both their long range and melee weapons are made using magic. The long range weapons fire enchanted stones that have specific properties (e.g. armor piercing or fragmentation), blasts of molten rock, bolts of bio-energy, or armor piercing spikes. Weapons that can damage or destroy vehicles and armor.

Combat vessels are made of stone, using magic to cruise underwater like a submarine or fly in the air as if they were jets. The largest submarines in the Lemurian fleet are 100s of ft long. 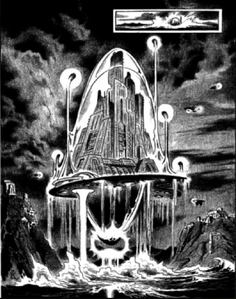 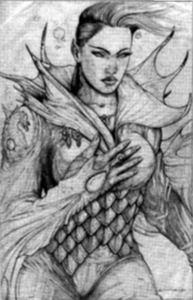 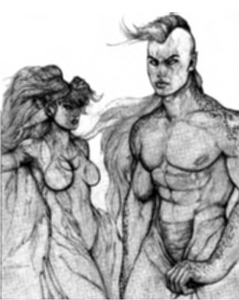 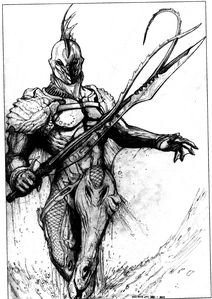 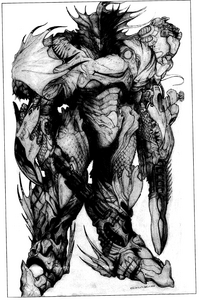 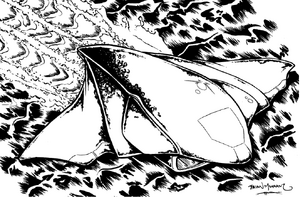 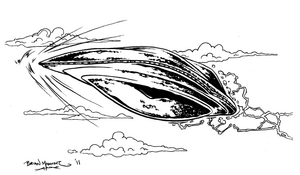