Len is a Succubus Demon Familiar with the ability to manipulate dreams, created from infusing the leftover thoughts of a deceased human girl into the body of a dead cat. As such, she is capable of shifting between the forms of a black cat and a prepubescent human girl. As a Succubus is she able to replenish Prana on her own and she has actually no need to form a new contract, with a new master, to live on.

She once served a Magus several centuries ago, and during that time, the magus helped Arcueid Brunestud defeating a top Dead Apostle by the name of Einnashe. And as a tradeoff for defeating Einnashe's particular hold, Arcueid promised to take care of Len after his death. Since then Len's active life has been short as she only awakened at the same time as Arcueid got out, for hunting vampires. But as she was made a long time ago she is growing as a familiar, and also as an animal spirit. In addition, the magus who created Len was extraordinary, so Len has much latent potential. Although she was under Arcueid's charge, they were unable to create a contract, because Arcueid can't make a contract with something that has arrived at the territory of demons, therefore Len is not considered Arcueid's familiar. Additionaly, Arcueid herself doesn't require a familiar so she won't order it to steal other people's life force and so she just lets it do whatever it wants.

She doesn't speak often, only once briefly in a scene of Kagetsu Tohya and during her interaction with White Len in Melty Blood Re-ACT. She seems to have a liking for cakes, and she dislikes taking baths.

In Tsukihime, Len appears indirectly in the "Near-Side route". She gives Shiki a dream of a sexual encounter (which can include any of the heroines: Arcueid, Ciel, Akiha Tohno, Kohaku, or Hisui). She is never mentioned by name. Since she is sent by Arcueid, and Arcueid wishes to know who came to Shiki, an interesting scene occurs if Arcueid is picked. In the Tsukihime Manga Len's silhouette (in cat form) can be seen in the window after he has the dream she sends him.

In Kagetsu Tohya, Len is the main heroine. When the main character, Shiki Tohno, falls into a coma after an accident, she takes it upon herself to keep him alive by putting him through a recurring dream sequence, repeating the same day over and over, his memory wiped clean for each day. Things start to get chaotic, however, as Shiki's split psyche, as well as her dangerously, even fatally, low reserves of prana, causes things to fall apart. Len puts her all into keeping things in order, while Shiki is slowly starting to gain a realization of his situation. After fighting his other self ("Shiki Nanaya") and confronting his image of death (Kouma Kishima) he meets Len in the courtyard of the Tohno Mansion and is able to form a contract with her.

In Melty Blood and its sequels, Len acts as Shiki's familar and resides at the Tohno Mansion. When White Len is first created, Len and Shiki set out to defeat her, though Len enters White Len's realm alone as to settle the score herself. She does defeat her, but does not kill her as she is still 'part of Len'. In Cazenda, the two are seen interacting with each other, as White Len intends to form a contract of her own as to gain her own master.

Len's black and White Len's white cat form make a cameo appearance as plushes won in a crane machine in the second Kara no Kyoukai movie when Shiki Ryougi's male personality explains the history of himself and the female Shiki. 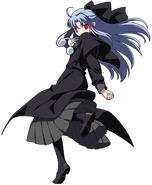 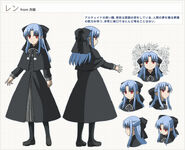 Len (Carnival Phantasm)
Add a photo to this gallery
Retrieved from "https://hero.fandom.com/wiki/Len?oldid=1148682"
Community content is available under CC-BY-SA unless otherwise noted.