He was voiced by Piers Stubbs, Trenton Rogers and Jesse Schwartz. In the singing voice, he was voiced Harrison Chad.

Leo is a 6-year-old (in season 1 ),7-year-old boy (in season 2), the Little Einsteins leader, and the one who pilots Rocket. He is Annie's big brother. Leo has red hair and green eyes.

His friends are Quincy, June, and Rocket. He also has other friends, but some aren't human (for example: one of his friends is a bumble bee from Africa). 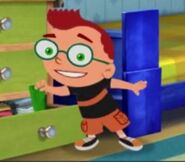 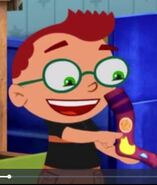 Leo and Silly Sock.
Add a photo to this gallery
Retrieved from "https://hero.fandom.com/wiki/Leo_(Little_Einsteins)?oldid=2194585"
Community content is available under CC-BY-SA unless otherwise noted.