Mentor of the Davenport Bionic Academy

Help Adam, Bree, Chase and Donald during them missions

Leo Francis Dooley is the main protagonist of Lab Rats and the 19-year-old bionic teen who is Adam, Bree, and Chase's step-brother and their closest friend. He is one of the five main characters and is the team's Strategic Mission Specialist. He is considered a social outcast in most circumstances considering his small amount of friends. Donald had a lack of trust for Leo due to Leo's tendency to accidentally destroy things, but has started to change his opinion, as he made Leo the team's "Mission Specialist." He gained a bionic arm in You Posted What?!?, after his right arm got extremely injured by Taylor. He gains a bionic leg in Space Elevator, when the elevator crushes his left leg severely. After the defeat of Giselle Vickers and Marcus Davenport, Leo went to go back to the Bionic Academy to oversee the students' progress with Adam while Bree and Chase headed to Centium City to be the new members of The Elite Force.

He is portrayed by Tyrel Jackson Williams.

Season 1: In this season, Leo is in his clumsy phase of life who is still trying to fit in at school. He meets the Lab Rats and introduces them into the real world and takes them to school. Leo and the Lab Rats became friends easily and Leo had to save the Lab Rats for a numerous amount of times. He meets his future self in Back From the Future.

Season 2: He becomes more responsible, and tries to stay on Donald's good side. He seems to help the Lab Rats more on mission rather then getting them into trouble. In this season, he matured into a more fresh stage. His knowledge allowed him to get promoted to a Mission Specialist. He tries to convince the Lab Rats that Marcus is up to no good. In season 2 Leo used one of Donald's inventions to travel to a parallel and acquired temporary bionics. (Season 2 "Parallel Universe")

Season 3: Leo, as Mission Specialist, is maturing in a higher stage. He had a change in personality being more responsible and trying to outsmart his opponents (Trent for example). Leo also begins to create his own inventions rather than breaking his step-dad's (Scramble the Orbs), though they have ended up causing damage. He became bionic in You Posted What?!?, thanks to Douglas fixing his damaged arm. Though his siblings' bionics were revealed to the world, Douglas urged him to keep his bionic arm a secret. However, in Rise of the Secret Soldiers, Leo accidentally revealed his secret to an angry mob of protesters. He later became an official member of the team. Douglas also unlocked Leo's new ability, which is to absorb any energy source as he used it on Taylor to get his revenge. He gets re-located to The Davenport Bionic Academy in First Day of Bionic Academy, although was a student, unlike his siblings. Leo is now a full member of the team, as he got a mission suit in Rise of the Secret Soldiers, and now goes on missions with Adam, Bree, and Chase.

Season 4: Leo, along with his siblings, continue to live at the Davenport Bionic Academy. Leo is a beginner student but wants to be a mentor. He gets a capsule for his arm in Under Siege. In Mission Mania we see Leo going on missions (Due to an ad he created). In Space Elevator, Leo is promoted to Advanced. He gets bionics in his leg in due to his injured leg getting crushed. He prepares himself for any major threats at the academy. He is also doing everything he can to prove himself. In Lab Rats: On The Edge, it is shown that Leo is now an Expert level student. He gets jealous of his siblings and forms his own bionic team. After causing Taylor to lose her eyesight, he quits the academy. Later, he saves his family and performs heroic acts with his regrouped team. When the family team split up in The Vanishing, Leo volunteered to oversee the Academy, along with Adam.

Leo was the only non-bionic kid in the Davenport-Dooley family until You Posted What?!?, where he becomes bionic thanks to Douglas giving him bionic components because his arm was damaged by Taylor. Later, in Rise of the Secret Soldiers, he unlocked a new ability. He is supportive of his mother's marriage to Donald Davenport. On their first day moving into his stepfather's mansion, he met Adam, Bree and Chase. He was attached to them soon and treated them as his own siblings. At school, Leo is considered the kid at the "bottom of the food chain" since he is one of the smart kids (Crush, Chop and Burn). However, with the help of his siblings, he was able to climb up the 'food chain' and starts to get noticed in school.

Leo is loyal, caring, and intelligent. He has demonstrated these qualities in various situations, especially when his family is involved. In Season 1, he showed his loyalty to his siblings by staying with them despite the possibility that he could be hurt (Rats on a Train); by sacrificing his date with Janelle—and ultimately, his safety—when the possibility of them dying became imminent (Back From the Future); and by keeping their secret of using their bionics at school despite its end result of him not being able to go to an event he's been looking forward to going to (Mission Invisible). He shows that he cares for them and about how they feel in isolated events, like when he allowed Chase to redeem himself by letting him use his idea to defeat the exoskeleton (Exoskeleton vs. Grandma); when he apologized to Adam and Chase for showing them up at the dance (Leo's Jam); and whenever he bonds with Donald (Can I Borrow the Helicopter?). His concern over their well-being can be seen more in Season 2. Upon Donald's request, he kept watch over his siblings, especially when they were around Marcus (Speed Trapped). After finding out the truth about him, he became more alert for them, even risking himself once again to prove to his family the danger that Marcus presents (Leo vs Evil).

His intelligence and problem-solving skills have come to play in several instances. Using his knowledge of science and street smarts to stop a high-speed train (Rats on a Train) and applying the simple things he observes to drain out a toxic gas during a mission (Missin' the Mission) are two instances. Despite this, on several occasions, he fails to take account of the potential consequences of his actions.

However, Leo can be manipulative and self-centered at times, which often stems from his unpopularity. He has taken advantage of his siblings' bionics multiple times. He has used Bree's view of him as her little brother to catch a ride to his classes and get his 'forgotten' homework (Smart and Smarter); Adam's super strength to win the school fitness challenge (Death Spiral Smackdown); and the father-son relationship he's formed with Donald to be able to see a movie his mother forbade him to see (Chore Wars). Leo also quickly turns arrogant if things start to go his way, and acts stuck up, normally leading to him falling back to the ground painfully. He also often blows his achievements or duties out of proportion, making himself out as far more important, popular and successful than he really is.

Leo also has a habit of creating his own problems; for example, he got trapped in Principal Perry's private elevator, which he was using despite students being forbidden (Chip Switch); him convincing Bree to misuse her bionic vocal manipulation leading to both of them being discovered (Bro Down) and disabling Chase's bionics and inadvertently amplifying his bionic aggression (Spike's Got Talent ). He also often lies, and uses lying to try and solve his problems, normally unnecessarily; however, this backfires on him as it has left others distrusting of him, meaning he sometimes has trouble convincing them even when telling the truth, as demonstrated with his efforts to tell them Marcus is evil.

Leo has a crush on Janelle. In a possible future seven years from the present (Back From the Future), Leo and Janelle are a couple. In Leo's Jam, he had a crush on Danielle, but he chose not to pursue that (in order to not hurt his brothers' feelings).

In You Posted What?!?, Douglas recreates Leo's right arm with bionic technology, replacing damaged parts of it with bionic components. Leo's right forearm is bionic and all bionic abilities Leo has are in his arm, as he has no bionics fully integrated into his nervous system, as his bionics are not directly connected to his brain or in his neck. Douglas made a remote deactivation function to control Leo's abilities. In Space Elevator, Donald recreates Leo's left leg with bionic technology (superhuman strength) because it was broken by the elevator and he was afraid he couldn't go on any missions. 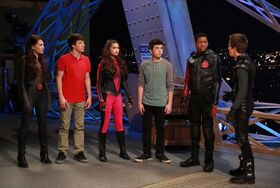 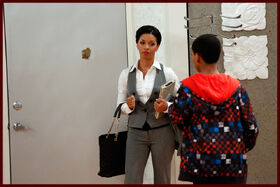 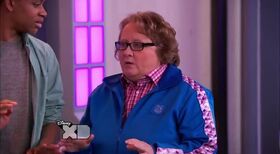 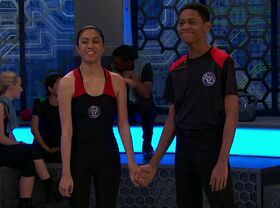 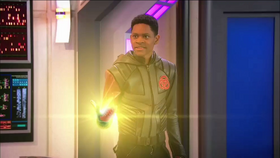 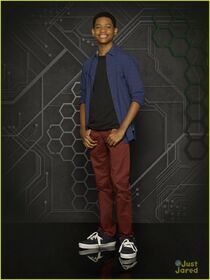 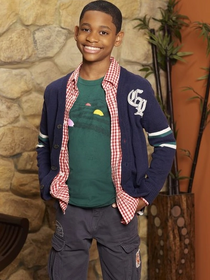 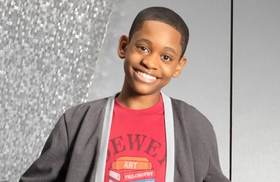 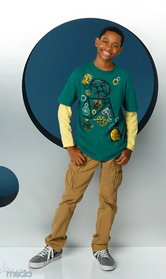 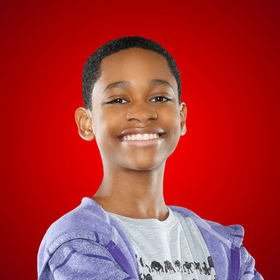 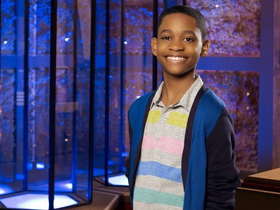 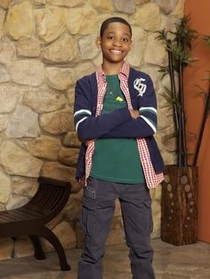 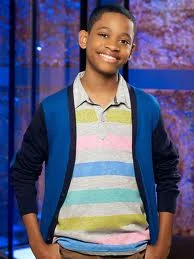 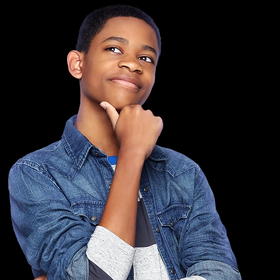 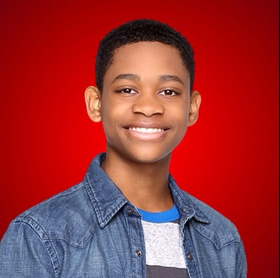 Add a photo to this gallery
Retrieved from "https://hero.fandom.com/wiki/Leo_Dooley?oldid=1918853"
Community content is available under CC-BY-SA unless otherwise noted.