Demigod and Savior of Olympus
Leo Valdez is the 15-year-old demigod son of Hephaestus and the late Esperanza Valdez, the best friend of Jason Grace and Piper McLean and one of the protagonists in The Heroes of Olympus book series.

Leo was born in Houston sometime between 1994-1995 to Esperanza Valdez and Hephaestus, the Greek God of Fire and Blacksmiths. Because of being a Hephaestus child, Leo got a rare ability to produce fire. From the ages of two to five, Leo was babysat by Tia Callida (actually Hera in disguise) who put him in a fireplace to sleep, let him play with knives, tried to make him fight a rattlesnake and had him make a fire out of crayons. One night when he was eight, Leo helped his mother out at her machine shop and when they where closing it up, Esperanza went back in to get the keys. However the minute she went back in, the door locked by itself and the Earth goddess Gaia appeared to Leo and tried to get through the door to attack Esperanza this caused Leo to try and protect his mother and his fire powers got out of control and caused the machine shop to burn down and kill Esperanza. Leo survived, but his relatives wouldn't take him in as they blamed him for his mother's death, because of this, Leo was put into many foster homes but he always ran away from them and was eventually sent to a boarding school in Nevada called The Wilderness School where he met Piper McLean who was also a demigod.

In The Lost Hero, Leo is one of the three main characters.

Leo does not appear in this book. He does come up in one of Percy's dreams and in the scroll message he sends to Camp Jupiter to tell them the Argo 2 was coming.

In this book, Leo is one of the seven main characters.

In The House of Hades, Leo is one of the seven main characters.

In The Blood of Olympus, Leo defeats Gaea (which kills him) but he uses the physician's cure to come back to life and save Calypso.

Despite how horrible his life is, Leo is a good-natured teen who is constantly making jokes. His Genius also helps him and his friends in several 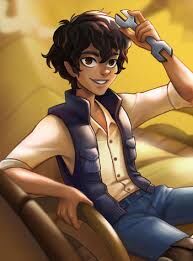 Leo Valdez
Add a photo to this gallery
Retrieved from "https://hero.fandom.com/wiki/Leo_Valdez?oldid=2174840"
Community content is available under CC-BY-SA unless otherwise noted.