Leo the Lion: King of the Jungle

King of the Jungle

To rule over the jungle
To rescue Tooey's mother (succeeded)

Leo is the husband of an unnamed lioness, the stepfather of Tooey and the anti-hero in the 1994 GoodTimes Entertainment and Jetlag Productions film "Leo the Lion: King of the Jungle".

He is the king of the jungle who was originally mean to his subjects, but eventually became a kind ruler.

He was voiced by Garry Chalk (who also voiced Blitzen).

It is stated that Leo was mean to all the animals in the jungle like no other lion could. He later frees a lion cub whom he calls Tooey who was captured in a net. Leo is able to free him with his claws.

He later then tells Tooey to be brave and teaches him what a lion could by looking at the astrology (Leo the Lion) to have courage. Later, Leo and Tooey try to get the other animals in the jungle to help them rescue the mother of Tooey has been captured to be sold for a circus. However the animals refuse as Leo is not kind to them.

After being lectured by Tooey, Leo is able to apologise to his subjects for his treatment of them by singing "I'm a Really Nice Guy". After that, Leo convinces them to head to the camp to free the imprisoned animals. After the plan worked, the animals cheered for Leo for being a helper. 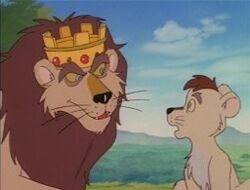 Leo and Tooey
Add a photo to this gallery
Retrieved from "https://hero.fandom.com/wiki/Leo_the_Lion_(Jetlag_Productions)?oldid=1634469"
Community content is available under CC-BY-SA unless otherwise noted.