Trying to save people

Scrub the T-virus and G-virus from the face of the earth.
Rescue Ashley from the Los Illuminados.
Avenge the President's death by killing Derek C. Simmons (succeeded).
Find evidence of Simmons' Involvement in Tall Oaks (succeeded).

Leon also appeared in several Resident Evil films: he is a supporting character from 2012 film Resident Evil: Retribution, the ultimate main protagonist from 2008 film Degeneration and Damnation, and the deuteragonist from Vendetta.

Leon burns the strong desire to serve and protect, and his life as a cadet was an eye-opening experience. At the age of 21 years old, he requested assignment to serve in the Raccoon City Police Department upon graduating from the Police Academy. His reason of choice was because of the widely-publicized murders taking place in and around the Arklay Mountains. He arrived at Raccoon City on the September 29th 1998, a day later than he was scheduled to. Due to the events in Raccoon City, this would be his first and only day as a Police Officer.

On September 29, 1998, Leon arrived at Raccoon City for his assigned Police Department. Having overslept, the sun had long since when he reached the city limits via highway. Because the blockade to the city by the U.S. Military had crumbled, he was unaware of the T-Virus Outbreak.

Reaching the city's business district, Leon stopped his car to inspect a body on the ground. Being unaware of the outbreak, he was surprised when several zombies tried to attack him. Escaping the undead, Leon met another survivor, Claire Redfield, who had encountered a zombie in the restaurant, to find her older brother, Chris. Together, Leon and Claire decided to seek refuge within the R.P.D.'s headquarters, but before they arrived, they got separated when Leon's police car got destroyed after a close encounter with a zombie in their back seat. The two barely survive when an infected driver nearly crashes his truck into them.

During his probe of the R.P.D. precinct, Leon meets another survivor named Ada Wong, a woman who claims she was searching for her lost boyfriend, John Clemens. They soon developed a bond, and Leon even took a bullet for her, fired by Anette Birkin. Leon and Ada managed to fight against most of the enemies, but Ada was eventually wounded by the mutated William Birkin's claw. During this time, Leon discovered from Anette Birkin that Ada is a spy, who only came to steal the G-Virus. However, Leon doesn't believe this until Ada tells him herself. Some time later, Ada saves Leon's life when he is cornered by T-00 in Umbrella's self-destruct mechanism room. She shoots the Tyrant on it's back to get the beast's attention, successfully doing so.

She is then attacked, grabbed and raised up the Tyrant, and she retaliates with a series of gunshots to the face, making the monster fall into a lava pit. However, Ada was severely wounded in the process and the facility's self-destruct mechanism has been activated. She then told Leon the truth about everything. Ada shortly falls unconscious, which Leon mistakes for death. However, at the near end, a mysterious figure (with Ada's voice and silhouette) helps Leon (or Claire) by giving them a Rocket Launcher to help them defeat the now mutated T-00. Leon is reunited with Claire, and the two (along with William and Anette Birkin's daughter, Sherry Birkin) make their escape through a secret railway and then escape via the train, leaving the mutated Birkin to be destroyed in the self-destruction sequence.

Following the Raccoon City Incident, Claire and Leon split up, and she continued her search for Chris, while Leon continued to look for Sherry. Leon and Sherry were soon apprehended by the U.S. Military; Sherry was taken away and placed in protective custody while Leon was interrogated. Leon never mentioned Claire or Ada, but the U.S. Government was interested in recruiting Leon, since he now possessed the experience they were searching for; Leon was then accepted.

His subsequent training as an U.S. Government Agent turned him from a standard police rookie into an expert special agent. He became much more competent in terms of weapon handling and unarmed combat, specifically knife combat.

In November 1998, Leon sent a friend of his, Detective Ark Thompson, out to investigate the Umbrella Corporation's facilities on Sheena Island. The following month, Claire set out to Europe to find Chris but was captured by Umbrella Soldiers after trespassing into one of the facilities in Paris. While in the Island Prison of Rockfort Island, Claire sent out an e-mail to Leon to inform Chris of her location so he could come and rescue her. Leon managed to track Chris down personally, and told him of Claire's situation, and Chris headed to the Island for Claire.

In 2002, before the destruction of the Russian Branch of the Umbrella Corporation, Leon was sent to a South American Country as part of an American military detachment after the headquarters were informed that a former researcher from Umbrella contacted a man named Javier Hidalgo. Due to the difficult nature of the operation, Jack Krauser, a seasoned operative with a history of brave service, was selected to be Leon's partner for the mission.

Krauser and Leon were sent on a mission by the U.S. Government to infiltrate this small South American Country. Finding Javier himself was the objective since he was a Drug Lord who has taken de-facto control over a large area of the jungle and rules the entire area absolutely. The small Government was unable to do anything about Javier's control of the drug trade, so Leon and Krauser have been called in. The U.S. Government had received information that a former Umbrella Researcher had somehow entered the region. Sources indicated that something strange was going on, but no accurate info could be obtained. Unwilling to risk a bio-hazardous outbreak, a secret military agency paired Leon and Krauser and sent them into this volatile region to determine what, if anything, was going on.

They later found themselves having to cooperate as a two-man cell in a T-Virus Outbreak. Leon also met a mysterious girl called Manuela Hidalgo, who seemed to be the only survivor of the village, though it is unknown why she didn't escape. Manuela turned out to be Javier's daughter; she contracted a rare disease and Javier kept her alive through the T-Veronica Virus. While exploring Javier's compound, Leon opened up to Krauser about his time in Raccoon City, as well as Claire's encounter with the T-Veronica Virus to explain how Umbrella's B.O.W's worked.

Eventually, Leon and Krauser battled Javier after he combined himself with a plant which was infected by the T-Veronica Virus. Manuela assisted them by unleashing the effects of the Virus upon her father. Javier was finally defeated and killed. Manuela was then taken into government custody. Leon lost his partnership with Krauser after the latter is discharged with any injury during the mission. Sometime later that year, Leon learned that Krauser died in an accident.

In 2004, Leon was assigned to protect the newly elected President Graham's family. When the President's daughter, Ashley, was kidnapped by a mysterious cult, Leon's first mission under the new President was to find and rescue her. Intelligence was gathered and Leon infiltrated an isolated village in Spain where the kidnappers were located. Leon was dropped off by two Spanish cops and then asked one of the residents there if they had seen Ashley. The villager attempted to kill Leon which forced the specially-trained agent to eliminate him. Leon then became under attack by even more villagers including a chainsaw wielding one. He then continued his search for Ashley and then found a captive named Luis Sera, then encountered the Village Chief, Bitores Mendez, who had both Leon and Luis as captives. According to Luis, Ashley was held in the village's church, so once Leon was freed, he managed to break into the Church and found Ashley. The man behind this, Osmund Saddler, was also there and revealed himself and his plans to the two Americans. Saddler revealed that they were also infected with the Las Plagas, a parasite which controlled it's host and obeyed the Control Plaga which Saddler had: Two cultists then forced Leon and Ashley to escape the church.

Leon managed to infiltrate a warehouse within the village and confronted Bitores Mendez, who transformed into a centipede-like monster. Leon managed to kill the corrupt chief and then stole his False Eye, which was the key out of the Village. Leon and Ashley escaped from the village and then were led to the nearby castle where more of the cultists were fought. The castle's owner, Ramon Salazar, confronted both Leon and Ashley, then introduced himself and his intentions. After fighting through the fortress, Ashley fell into one of the traps and the agent returned to the objectives for searching for her. Leon ran into Luis but also witnessed his death at the hands of Saddler. Leon then rescued Ashley again and infiltrated a hall but she was captured again by one of Salazar's Novistadors. Leon confronted Salazar at a tower where he informed Leon that Ashley was moved to an Island. Salazar then fused himself with the Queen Plaga and his remaining Verdugo bodyguard in an attempt to kill the agent, but Leon managed to finally kill the young castellan.

Leon encountered Ada Wong, who had survived the destruction of the Umbrella lab facility, again, and she helped him get to the island where Ashley was imprisoned where he encountered more enemies: Soldiers and the terrifying Regeneradores. Leon soon encountered Krauser within the island, who revealed that his betrayed Leon and was now working under Wesker, in an attempt to restore Umbrella. Leon encountered and killed U-3 (IT), and then encountered Krauser again and found out his arm was infected with Las Plagas, but still managed to defeat his former partner. Leon then rescued Ashley from Saddler himself with Ada's assistance and finally confronted Saddler, then saved Ada. Saddler was finally killed and the remaining survivors escaped the Island before it exploded.

Leon and his new ally, Helena Harper, encounter the C-Virus infected zombies and other monsters such as Bloodshots, Whoppers and Shriekers. They head to the President but discover him transformed into one of the many zombies; they were then forced to take him out. Helena's younger sister, Deborah Harper, was also infected with the C-Virus and they were also forced to eliminate the monster she became. They find out Derek C. Simmons, the National Security Advisor, is responsible for the Virus's release and wish to hunt him down.

Leon and Helena encounter Chris Redfield and Piers Nivans who were about to gun down Carla Radames, the identity thief of Ada Wong and the one responsible for the deaths of Chris's soldiers and also the C-Virus release with Simmons. Leon stops them, believing her to be Ada and a key witness, although the two teams split up: Chris will go for Carla and Leon will go for Simmons.

Leon, Helena, Sherry Birkin and Jake Muller confront Simmons and become under attack by his men. Leon and Helena confront the infected Simmons on a train and witness his mutation. After a long battle with the monster, Simmons is finally killed.

Helena visited Deborah's grave but Leon, Hunnigan and other agents soon found her. Ready to face being taken into custody for what she was responsible for, Leon returned her gun to her and she was informed that she wasn't being arrested and was not to be held responsible for Simmons' crimes. Helena then gave Leon Ada's compact.

Leon makes an appearance in Project X Zone 2. He is a support character for any of the playable characters. 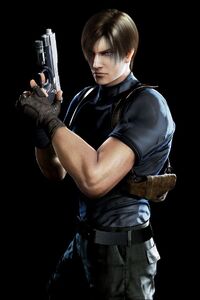 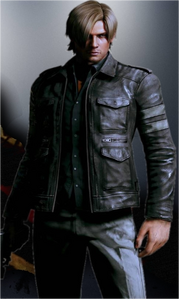 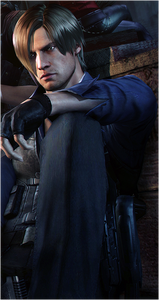 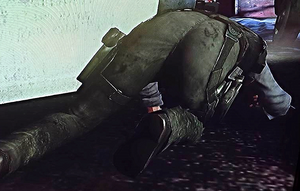 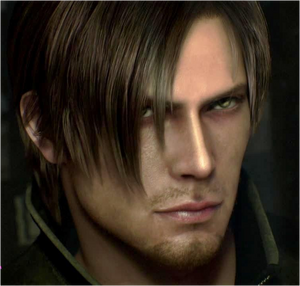 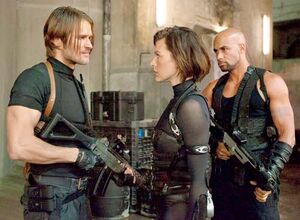 Retrieved from "https://hero.fandom.com/wiki/Leon_S._Kennedy?oldid=1727687"
Community content is available under CC-BY-SA unless otherwise noted.