Leona, also known as The Radiant Dawn, is a heroic playable champion in the multiplayer online battle arena game League of Legends.

She is an esteemed warrior of the Solari, a Rakkor tribe from Targon dedicated to worshipping the sun. She was close friends with an adopted acolyte named Diana, who was disciplined by her superiors for preferring the night instead, but Leona still reached out to her. While Leona tried to convince her friend to follow her ways, Diana eventually gave up on the Solari and climbed up Mount Targon, while Leona followed her worriedly. In the process, they both became Aspect Hosts and became separated even more as Diana began to lead the Lunari, while Leona commands the Solari while wanting to find her former friend.

The 79th champion added to the game, Leona was released on September 13th, 2011. She is usually played as a support.

Leona was born to the Solari, a Rakkor tribe dedicated to worshipping the sun. During her training as an acolyte, she followed the Solari faith as easily as breathing, and was proficient in all of her training to the envy of her peers. One day, the Solari took in a young orphan named Diana, who did not follow the Solari's values as easily and instead preferred the moon and the night. The Solari punished Diana constantly and called her a heretic for her blasphemy, but Leona felt pity for her and saw her as a lost soul searching for meaning.

While Leona tried to convince Diana to follow the Solari faith, she still felt like escaping. One night, Diana told Leona about a secret alcove atop Mount Targon that held evidence of secret societies. Leona tried to convince her otherwise, which she initially obliged, but she eventually snuck out by herself to climb. Leona set off after her friend, facing all of the challenges on the peak as the mountain's trial. She made it up to the peak, where she saw Diana being blasted with a column of light. Leona stepped in to help her, but she was struck by a light as well. Leona and Diana were both deemed worthy and became the current Aspect Hosts of the sun and moon respectively.

They both convinced each other to follow their own path, but could not, so they fought with a duel which ended with Diana raising her blade above Leona's throat, but she fled instead of killing her. With devastation, Leona headed back to her home where she was horrified to see lots of Solari priests dead, killed by Diana's power.

The survivors were in awe of Leona for having the Aspect of the Sun, so she became a leader for her people, fighting for the Solari's faith while trying to find Diana before her power destroys her.

Leona is devoted and faithful, dedicated to following the faith of the Solari and the glory of the sun. She always follows discipline and relies on her superiors' judgment, but her adherency to the Solari's values prevent her from seeing different points of view, like being unable to understand why Diana was against the Solari's teachings and believing the Solari were the right path. Despite this she has taken consideration towards Diana's views and was willing to listen to her even though none of their fellow trainees would accept her, and even after having a fight she apologized to Diana and developed romantic feelings for her.

As they grew older, Leona and Diana became more forceful with their values and drifted apart, though Leona still cared about her friend and risked her life to protect her. After having a fight, Leona returned to the Solari as their leader, being an inspiration to her people and enforcing the Solari's faith. But despite having a new nemesis with Diana, they do not hate each other nor their respective tribes, and lower their weapons when they see a display of Lunari and Solari unity, before meeting eyes with each other again. It is implied that Leona and Diana still have romantic feelings toward each other even as adults, hinted at multiple times in the 2021 Pride Event.

Leona in Legends of Runeterra.

Young Leona and Diana in "Rise with Me".

Promotional artwork of Leona and Diana for Legends of Runeterra. 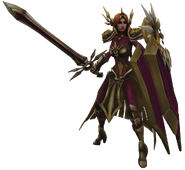