Leonard Horatio "Bones" McCoy, MD was the tritagonist in the sci-fi television program Star Trek. He was portrayed in the original series, the first six Star Trek motion pictures, and the pilot of Star Trek: The Next Generation by the late DeForest Kelley. His alternate reality counterpart was portrayed by Karl Urban in the 2009 film Star Trek.

"Bones" was a noted physician and scientist of the 23rd and 24th centuries. He was an accomplished surgeon, physician, psychologist, and exobiology, and was also considered an expert in space psychology. As ship's surgeon and chief medical officer, he served aboard the USS Enterprise and USS Enterprise-A for a combined twenty-seven years.

McCoy was the son of David and Eleanora McCoy. He attended the University of Mississippi (Ole Miss), and happened to meet the joined Trill Emony Dax. She suspected that he would eventually become a surgeon.

As a young man McCoy had married and fathered a daughter, but later divorced. To escape the pain he felt at his marriage falling apart he entered Starfleet. He later met a young Starfleet officer named James T. Kirk and became close friends with the man. McCoy served on a medical mission to Capella IV before joining his friend Kirk as chief medical officer on the Enterprise. Over the course of the five year mission McCoy came to consider first officer Spock a close friend as well, even though they frequently argued with each other. McCoy also became good friends with the others on the Enterprise senior staff - including Nyota Uhura, Pavel Chekov, Hikaru Sulu, and Montgomery Scott.

It was McCoy that Spock chose to safeguard his katra, or his immortal soul, when Spock entered the warp chamber to save the Enterprise at the cost of his own life. Heading back to the Genesis Planet, Kirk and the Enterprise crew retrieved the Genesis regenerated body of Captain Spock. This came at a terrible price as Kirk's son David Marcus was killed by the Klingon commander Kruge's crew, and Kirk was forced to destroy the Enterprise to keep her from falling into Klingon hands.

After leaving the rapidly disintergrating Genesis Planet, Kirk and his shipmates returned Spock to Vulcan. There a Vulcan priestess transferred Spock's katra back to his regenerated body. Over the next few months McCoy underwent a series of mind melds to ensure that any remaining parts of Spock's consciousness had been completely transferred back to Spock.

When the Whale Probe attacked Earth, McCoy accompanied his shipmates back in time to the late 20th century to retrieve humpback whales that the probe was looking for. McCoy played a key role in helping secure the plexiglass needed to build a tank to hold the whales. The mission was successful and the whales the Enterprise crew brought to the 23rd century were able to convince the probe to leave.

After the Federation council dropped all the criminal charges against McCoy for his role in the unauthorized mission to save Spock, he and his shipmates were assigned to the Enterprise-A. McCoy served as CMO on that ship until that ship had been decommissioned in 2293.

Prior to standing down from duty on the Enterprise-A, McCoy participated in the peace mission to the Klingon Empire.

After the apparent death of Kirk McCoy continued his career in Starfleet. McCoy attended the wedding of his friend Spock to Saavik in the 2340s. By 2365 the 137 year old Admiral Leonard McCoy boarded the Galaxy class USS Enterprise (NCC-1701-D) to inspect the medical facilities. Commander Data escorted him to a shuttle that was taking him to the USS Hood. On the way McCoy told Data that the new ship had the right name, and that if they treated the Enterprise like a lady she would always bring them home. 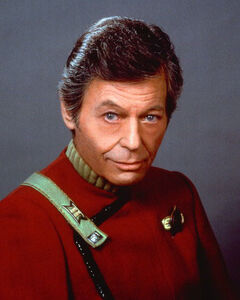 McCoy as he appeared in the late 23rd century. 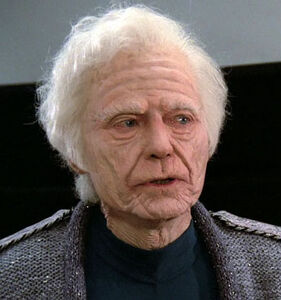 A 137 year old Admiral McCoy in 2364.
Community content is available under CC-BY-SA unless otherwise noted.