Leonardo is a fictional character and one of the four main protagonists of the Teenage Mutant Ninja Turtles comics and all related franchise. He is the oldest out of the four and mostly depicted wearing a blue bandana while his signature weapons are two Katanas. He is shown as the leader of the four turtles and the most disciplined. He is named after renaissance artist Leonardo da Vinci.

Personality Leonardo is the most collected of the four. Leonardo is fairly modest and sensitive, rarely issuing direct commands and seemingly much more relaxed around his brothers thinking of himself as more of an equal than a leader. Despite his calm nature he is often at odds with his more hot-headed brother, Raphael.

Leonardo trains hard and reads up on strategy to prepare his family for times of distress. He has been accused of having expectations that are too high, but he doesn't agree with that. He is not trying to be perfect, only perfectly proficient. Maybe when they are out of danger, he will relax, He loves his family more than life itself and thus he feels responsible for their safety. While he's sure that master Splinter is very capable of taking care of himself, his brothers worry him. He feels that he must be there to help them stay focused. 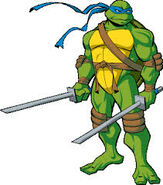 Leonardo in the 2012 cartoon

Add a photo to this gallery
Retrieved from "https://hero.fandom.com/wiki/Leonardo?oldid=323375"
Community content is available under CC-BY-SA unless otherwise noted.