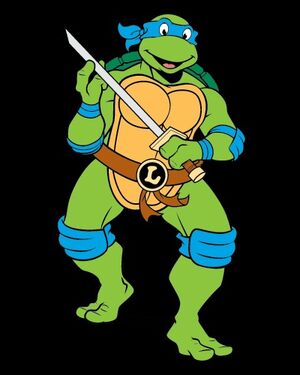 Leonardo is one of the main characters of Teenage Mutant Ninja Turtles. He is the brother of Donatello, Raphael, Michelangelo and adoptive son of Splinter. He is the leader and commander of the Turtles and is the closest to Splinter.

He is voiced by Cam Clarke, who also voiced He-Man.

He wears blue-masked and have two katana for weapons.

He is the most serious, level-headed member of the team, who values his leadership.

He is shown with having a very level head, akin to his leadership qualities in the comic. However, as the series carried on, he became more reactionary and at times would screech in the very high pitched voice, which was very different from the original, deeper pitch in the first season. This presumably may have been the result of the writers downplaying Leonardo as a hero in favor of Michelangelo and Raphael, who were more popular with audiences.

In one episode, he suffered a crisis of confidence and left the group to do some soul searching; his brothers all tried their hands at being the leader in his stead, only to find that none of them could match his leadership skills, and he came back to them. He was attracted to a young kunoichi named Lotus, a swordswoman prodigy from Japan who was hired by Krang to replace Shredder, whom she easily defeated (along with Rocksteady and Bebop). She and Leonardo dueled to a standstill before she resorted to a trick sword to knock him out. When they met the second time, she tried to convince him to join her as "ninja for hire", but he refused. She turned on Krang and escaped to continue her mercenary lifestyle, telling Leonardo that there was little good in goodness, though she hoped that they would one day be on the same side.

Leonardo also seems to enjoy reading. For example, many times when the Turtles are at home, Leo is reading a book. In the episode Four Musketurtles, he is the only Turtle that read The Three Musketeers. Another good example is in "Leonardo is Missing"; while the other Turtles go to an arcade, Leonardo stays at the lair and reads. In the Season 6 episode "Snakes Alive", it is revealed that Leonardo has Ophidiophobia, but confronted it later.

In the Season 3 episode "Take Me to Your Leader!", Leonardo gives up his leadership and walks away after a dream he believes convinces him he is no longer a good leader. The others have to find him, and stop Shredder, Krang, and Bebop and Rocksteady from draining energy from the Sun with a Solar Siphon and store it in solar batteries.

However, Leonardo returns when he spots a bridge collapsing due to snow. After a man says that everybody talks about the weather but nobody does anything, Leonardo realizes his responsibility and begins to search for his brothers. He later finds them, and together they save the Earth.

Leonardo also made a couple of appearances in the 2012 series in the episode, The Manhattan Project. He and the other turtles along with Casey and April are seen through a portal by their 2012 counterparts walking on a road and he made a speaking cameo along with the other turtles at the end of the episode when a space worm from the 2012 dimension started terrorizing the street. All four turtles see the worm and spring into action while shouting their famous catchphrase, 'Cowabunga'.

Retrieved from "https://hero.fandom.com/wiki/Leonardo_(TMNT_1987)?oldid=2161775"
Community content is available under CC-BY-SA unless otherwise noted.