Leonardo is the one of main protagonists of the 2003 version of Teenage Mutant Ninja Turtles. He is the oldest brother of Donatello, Raphael, Michelangelo and the oldest adoptive son of Splinter.

Leonardo wears a blue bandana while his signature weapons are two Katanas. He is the leader of the four turtles and the most disciplined.

Leonardo is the leader with honor, calm, and reassurance. He’s most "spiritual" of the four. He is kind of a grown-up, psychologically because of all of his seriousness.

He has a very close bond with Splinter, and has a strong sense of honor and ethics, along with being a dedicated follower of the Bushido code. Episodes that deal with the Shredder and honor usually also focus on Leonardo, and he is often the Turtle who "saves the day" (in fact, Leonardo is the turtle who decapitates the Shredder early on in the series—of course, before they are aware that Shredder is in fact an evil Utrom by the name of Ch'rell who doesn't have a neck, let alone a distinct head).

Raphael and Leonardo occasionally argue, with Raphael sarcastically calling Leonardo "Fearless Leader", although the two are shown to be very close especially in times of trouble. Despite this, all three of his brothers view him as a pillar of strength and are at a loss when he is injured or absent. One of Leonardo's most prominent qualities is his determination to believe the best in people, even potential enemies (i.e., Karai, Traximus and Quarry).

Though mature calm and level-headed as he may seem, Leonardo can easily gets angry, he can easily be just as explosive Raphael. Sometimes his explosive outbursts can be more violent and raging than Raphael’s. The first half of the fourth season shows a more traumatized, dark Leonardo, due to his feelings of failure, as did a short period in season one after the Shredder returns, in which he became depressed and angry over the loss of his swords. It wasn’t until he accidentally injured Splinter and subsequently received training from the Ancient One that his personality returned to his normal calm, happy, and reassuring self.

Through much of the fourth season, while the other turtles are fully healed and recovered from their battle with the Shredder, Leonardo still could not get over his failure. He becomes bitter and increasingly stern with himself and adopts a greatly aggressive personality (which has been likened to Raph's previous impulsive and hotheaded ways on many occasions). Leonardo also shows considerably less reluctance in using violence to interrogate people, and devotes himself to even greater lengths of training. His brothers worry about him and Splinter feels he must move on. It comes to a head when Leonardo loses his temper and nearly causes Splinter serious injury during a training session. Splinter sends Leonardo to find Master Yoshi's own sensei, The Ancient One, since there is nothing more he could do for his troubled son. Leonardo encounters a strange short man, as well as obstacles that echo his own anger. In the end, Leonardo admits that he was angry over failing his family while fighting the Shredder and that his only option was to self-destruct the ship to stop him. Leonardo comes to terms with his anger, accepting he did every thing in his power, and begins training under the short man, who turns out to be the Ancient One. Leonardo only leaves when he learns that his family is in danger (a result of Karai's vengeance, which destroys the lair and presumably eliminates them). Leonardo returns to the city, reunites his family in a safe location, and battles Karai (giving her one last chance to leave the Turtles in peace).

In the fifth season, of the eight acolytes under the Tribunal's training, Leonardo is the only one who doesn't receive a weapon from the Spirit Forge. It is implied that his spirit is his weapon, and anything he holds is merely an extension. (This was hinted at in previous seasons.) His otherworldly form is that of a dragon, a rare form, unheard of in someone his age. It is shown destroying evil guarding the second artifact. This avatar is first shown in "More Worlds Than One". His brothers later exhibit dragon avatars as well. In the fifth episode "Beginning of the End", he is given the sword "Gunshin" (one of the Fangs of the Dragon that commands the "White Flame of the Dragon King") by the wounded Feragi, who believes the sword was meant to be Leo's. Leo returns Gunshin in episode 12 "Enter the Dragons" when Feragi returns to help battle the Shredder, because he believes the sword truly belongs to Feragi.

In the Fast Forward season, and the Back to the Sewers season, the damage that occurred to Leonardo's shell as stated above has somehow been repaired.

Leonardo is trained not just by Master Splinter but the Ancient One himself, Hamato Yoshi's trainer and adoptive father. From then on, Leonardo is far more experienced and skillful at even more complex ninjitsu moves than even Splinter, Raph, Mikey, and Donnie all at once. He cuts Shredder's head off in a one-on one-duel in Shredder's domain.

Leonardo is the most skilled at ninjutsu and other forms of hand-to-hand combat he all learned from his adopted father and master, Splinter. As his weapons are dual katanas, he is proficient in "the ways of the sword" and basic knife-throwing techniques. If need be, he can use Qi Qong to slow his own bodily functions to survive temporarily without oxygen. After training sessions with "the Ancient One" he developed an intuitive/psionic-like ability to see what has previously transpired by "allowing thought to flow out and within." 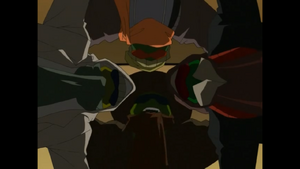 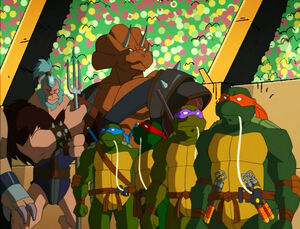 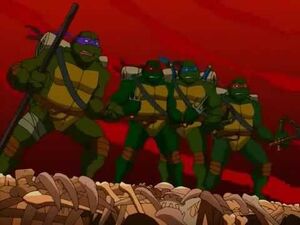 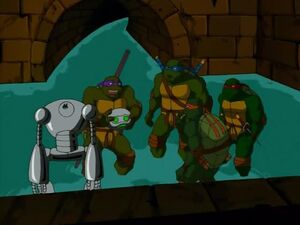 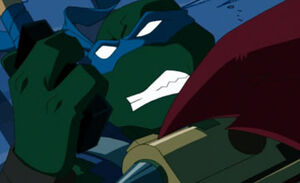 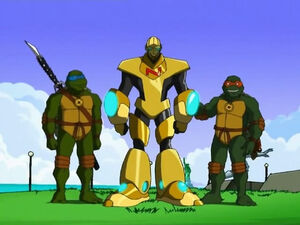 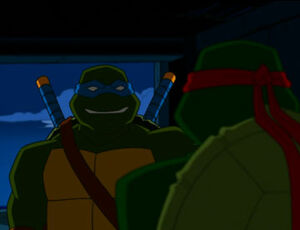 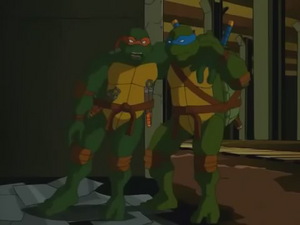 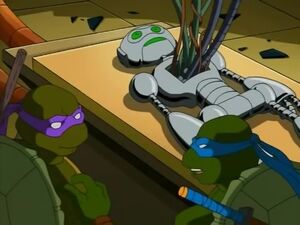 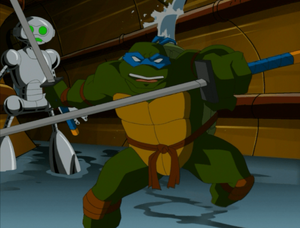 Retrieved from "https://hero.fandom.com/wiki/Leonardo_(TMNT_2003)?oldid=2161777"
Community content is available under CC-BY-SA unless otherwise noted.