Leonardo is one of the main characters of Rise of the Teenage Mutant Ninja Turtles.

He is voiced by Ben Schwartz who also voices Sonic the Hedgehog in the 2020 live-action movie, Dewey Duck from the reboot of DuckTales, Randy Cunningham from Randy Cunningham: 9th Grade Ninja and Banarnar in the 2019 sequel of The Lego Movie 2: The Second Part.

He wears a blue bandana like in all the incarnations of the Turtles (except the Mirage comics). Leo originally used two katanas like his mainstream counterpart, and later wields an ōdachi sword in battle that can open portals.

He is the "self-proclaimed 'coolest' brother". He is also known to be called the "trickster", and he thinks that his one liners will "fire up the team."

Leo began life as a juvenile turtle in Baron Draxum's laboratory. Wishing to create a mutant army with formidable combat capabilities, Draxum used Lou Jitsu's DNA paired with his ooze to turn Leo from an ordinary turtle into a mutant. He and his brothers were then stolen from Draxum's laboratory by Lou Jitsu promptly after their mutation and Leo went on to be raised in the sewers of New York City alongside his brothers by Splinter. Eventually, Leo and his brothers met a human girl named April O'Neil and forged a strong bond with her through the years. 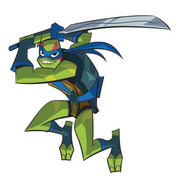